Does the weather dictate how much we buy?

The Office for National Statistics (ONS) has undertaken a review of unseasonal weather and the effect it has on the retail sales index.

Although retail sales figures are seasonally adjusted (for the Christmas period for example) they are not amended for bouts of extreme weather.

The ONS says that only really sustained and extreme weather conditions can have a substantial effect on the UK economy such as the very cold and snowy period in December 2010, which was designated as a statistical special even. It also points to other examples like the Queen's Diamond Jubilee, the Olympic and Paralympic Games, and the volcanic ash cloud in 2010.

But, says the ONS, retailers say that their sales can also be effected by ‘unusually high or low temperatures or rainfall’ so it was decided that this should be looked into.

The ONS looked at hot weather, cold weather and rainfall over recent years to see whether a correlation could be found between the weather and how much was bought and sold.

On the impact of weather on retail sales the ONS said:

“Figure 1 compares retail sales since 2003 with the average (mean) UK temperature relative to the average for that month. It also highlights months with severe weather events, including flooding in July 2007 and November 2012. 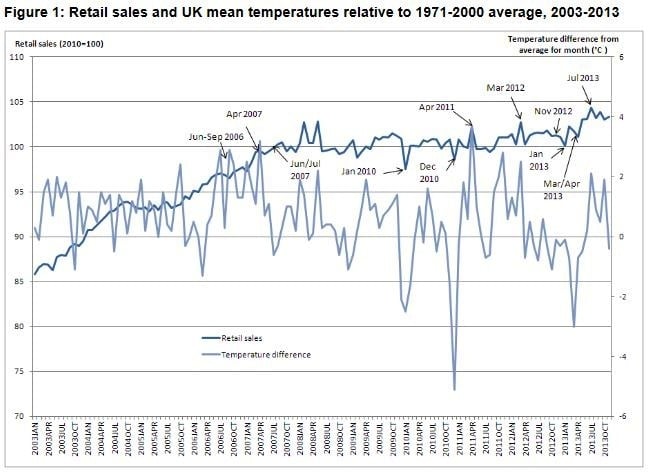 “The broader pattern is of a flatter picture of retail sales since 2008, with more frequent changes from month to month. This possibly reflects an increased variability in spending, which may reflect less secure consumer confidence during and after the 2008/9 economic downturn.”

The one line confusion drawn was that “In terms then of the retail sectors sensitivity to the weather, past periods show a mixed picture with no clear relationship between the two”.

5 sins that will send a conference audience to sleep