Does This Mean That UKIP Agrees With Boris Johnson?

Boris Johnson last week endorsed an economic report saying that the UK should leave the EU rather than stay in the Union on its current terms – i.e. leave only after attempts at renegotiation have failed.

Then, after the chief executive of the insurance company Legal & General said that the UK should leave the EU if it could not renegotiate a better deal, UKIP’s Steven Woolfe said: “I wholeheartedly welcome the comments on Britain's place in the world this morning from Legal & General CEO, Dr Nigel Wilson”.

Does this mean that UKIP has changed its stance from ‘we must leave’ to ‘we must leave if we cannot renegotiate the treaties’?
Doe it further mean that all Eurosceptics should now be voting Tory to give them time to renegotiate a better deal before turning to UKIP?

In a massive change from his stance in April on such things as support for an amnesty for illegal immigrants, all 500,000 to 750,000 (estimated) of them Boris Johnson, the Mayor of London (which he said could fall like Sparta), has just recently tried to impress people with his eurosceptic credentials on the back of expressing an interest in re-entering the Westminster fold as an MP to represent the people of what could be a ‘great and glorious’ country outside the EU – despite being the most pro-immigrant politician in the land. Not to mention the last flag-less St George’s Day.

But Boris’s new found euroscepticism only runs as deep as committing to leave the EU IF we don’t renegotiate something the details of which are yet to be decided and which could all change again in a few years when we’ve all forgotten what it was all about?
Then, when you look at what the chief exec of the L&G has said you realise it matches BoJo’s view to a T. 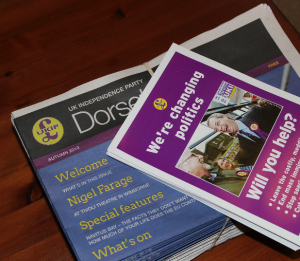 “I wholeheartedly welcome the comments on Britain's place in the world this morning from Legal & General CEO, Dr Nigel Wilson. He said that we should leave the EU if the UK does not negotiate a better deal. He said that the UK is underachieving by focusing far too much on Europe rather than other faster growing Global markets.

“The UK needs to stop looking inward to Europe and must have an outward looking, global trading vision if it wants to succeed as a global economic power.

“Nigel Wilson is the first FTSE 100 CEO to publicly state the obvious and I think his comments are likely to be the first of many similar thoughts from UK PLC chiefs in the coming months.”

Is UKIP holding out an olive branch for Boris Johnson to take hold of if he becomes the next Tory leader? Is this the first indication of some sort of deal that could be done between the Tories and UKIP, all dependent on a change of leadership?

There may be many UKIP members, supporters and activists who look at what Steven Woolfe has said in the cold light of day and ask themselves if this is what they wanted when they started on the UKIP journey. ‘Does this mean UKIP will push to stay in the EU if, against all the odds, we get a good renegotiation?’ they will ask themselves. ‘So much for changing the face of British politics’ they will say.

I will repost the words of Steven Woolfe here – just follow the bold parts through:

"I wholeheartedly welcome the comments on Britain's place in the world this morning from Legal & General CEO, Dr Nigel Wilson. He said that we should leave the EU if the UK does not negotiate a better deal.”

Consider these words carefully as politicians do not make written statements like this without much thought as to how they will be construed.