Does Weidmann want to destroy the euro?

Every time European policymakers take steps toward safeguarding the future of the single currency, something soon crops up that cast doubt on their plans. Earlier this year we saw the Germans lead two other countries into a u-turn on the treatment of ‘legacy’ bank funding – essentially, reversing an earlier agreement from all countries to let Spain and Ireland transfer (some of) the bank bailout costs to the pan-European fund designed to help, instead of having to shoulder the burden themselves. This week, with the new extension of maturities and lower funding costs for Greece, the market is worrying about just how the proposed ‘buy-back’ operation will work. But in the middle of the coverage were some remarks from Jens Weidmann, head of the German Bundesbank, that worried me even more.

Weidmann may not be a household name outside of his native Germany, but his credentials are pretty good. He is an economist with a strong pedigree, having worked at the IMF and the German Council of Economic Experts. He joined the Bundesbank in 2003, before moving to head up the Chancellor’s Economic Policy Group in 2006. He was appointed as President of the Bundesbank in May 2011, after his predecessor resigned in protest at ECB policy.

The bottom line is that Weidmann is not stupid. By all accounts, he has a very good grasp of economics. Which, in part, is why his comments – particularly his recent ones – are so worrying.

Apart from a tendency to assume that competitiveness and productivity are the same thing – which they definitely are not – Dr Weidmann has consistently spelt out the need for peripheral countries to feel the pain, but not for core countries to help. He has rejected outright any need for German domestic demand to be stronger, which would be a significant help for the rest of Europe (and which Germany can afford). He was the sole member of the ECB’s Governing Council to vote against the new Outright Monetary Transaction (OMT) programme, believing it to be too close to deficit financing – which, to be fair, it is.

And he was at it again yesterday. Weidmann said it was up to states to tackle the origins of the crisis, and to make banking systems solid. Bank’s legacy assets should be covered by national governments. Greece must not set a precedent. And – most worryingly – euro area central banks had ‘already done more than enough’ to fight the debt crisis. 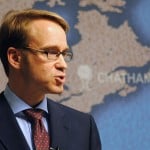 Apart from the obvious oxymoron – if euro area banks had done ‘more than enough’ then we wouldn’t be in the crisis any more – the problem with Weidmann’s positions as a whole is what they imply. To reiterate, Weidmann is not stupid. He knows that, without external help, there are real question marks about whether countries like Spain and Ireland can stump up enough money to put their banking sectors on a sound footing. He knows that Portugal and Greece need funding precisely because they can’t raise money themselves. And he also knows that, without this external support, there is no magic policy or wand that will make everything alright. Without the support, the euro will break up. In fact, even with support and the welcome recent steps, social unrest could still undermine the single currency.

Dr Weidmann understands this. The German politicians debating the Greek deal today also know this – that is why the main opposition is likely to vote with Merkel’s CDU/CSU party to approve the deal. The implication of Weidmann’s opposition is deeply worrying. In fighting against all the support for fellow euro member states, Dr Weidmann is too clever not to realise that he is arguing for the end of the single currency. He knows that would impose massive costs on Germany, via its banking and financial exposures and the hit on competitiveness that would follow. But, for whatever reason, the most powerful economist in Germany seems determined to destroy the euro.