“The demand we’ve seen for research into pharmaceuticals, defence and the media sector has spiked this morning, as hedge funds and other institutional investors take stock of the implications of the Trump victory.

"A common theme around US healthcare suggests that many investors are particularly concerned about the impact of the result on pricing in the pharmaceuticals sector, such as for cancer drugs, and the effect on possible M&A opportunities within the sector.

“The research pipeline saw less of a bulge in the run up to the US election, compared with enquiries prior to the Brexit vote earlier this year, which suggests investors were potentially more confident in a Hillary majority than they were approaching the last major geopolitical shock to hit markets.
“Investors will have their work cut out to stress test their portfolios, and get to grips with the new landscape, and we expect the growing demand for sector specific research to continue as we hear more from Trump about his policy intentions.” 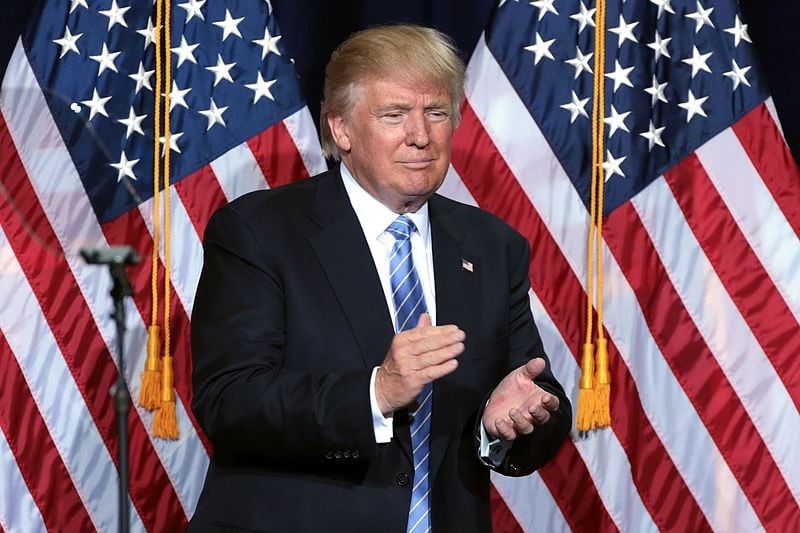 “For the second time this year in a major vote, opinion polls have called it incorrectly. Brexit caught markets in a brief panic followed by a very quick recovery. With event risk being one of the major risks in 2016-17 for pension investments, finance directors and trustees alike should be considering what this means for their pension schemes.

"Volatility is likely to continue in the immediate short term as election rhetoric fade and clear policies are likely to emerge. Long term investors are best served managing portfolios according to evolving macroeconomic themes rather than passing short term events with sharp but short impact.

“As well the volatility of risk assets and the impact of changing yields on liability values, pension schemes should consider whether inflation risks have increased in light of this result. Finally, event risk continues with the anti-establishment theme likely to feature heavily in European elections.”

“Not only would the Fed hold off hiking rates in December if markets remain agitated, it is also possible that Trump's comments about Fed rates being held artificially low to help Obama could complicate the Fed's thinking. Do they take Trump at his word and raise rates or do they fear his reaction to a rate hike? A December rate hike is now less likely.

“The real issue is whether a Trump presidency will be good or bad for the US and world economies. US businesses will not be encouraged but it may be that working class households feel more encouraged to spend. The problem now is the lack of detail about what President Trump will do and what the markets don't know, they will make up. Uncertainty and volatility are likely over the coming months as we await more colour on his policy programme.”

London Central Portfolio (LCP) takes the view that there will be a net positive impact on the market as investors retrench to blue-chip tangible assets as uncertainty on the political and economic stage is heightened once again.

Jitters in global equity markets driven by widespread speculation will be countered by flights to safety, with gold, the Yen and Swiss Franc set to benefit. Whilst the result will likely move the global spotlight away from Brexit, repercussions may be felt across Europe with the prospect of anti-establishment votes becoming keener. At the same time, the likelihood of the UK Parliament thwarting the people’s mandate to exit the EU has dwindled.

Whilst all of this plays out, Prime Central London property, a traditional safe haven, is expected to benefit from a similar flight to quality, asset-backed investments.

“Trump is the wildcard president and one that few investors will be welcoming this morning. Trump’s policies would likely see a destabilised financial system and damaged international trade relationships. It’s not all doom and gloom though – Trump’s pro-business taxation policies may mitigate some of the damage done to the wider economy.

“In these times of economic uncertainty it is easy to get swept up in the headlines and look to find simple answers for what are, in reality, complex situations. We can speculate on the market impacts of macro events like the US election, but the reality is that most often they will have less long term impact than some would have you believe. The important thing is to ensure that any investments are well diversified to minimise the impact of any immediate market fluctuations.”

"With every state that falls the way of Donald Trump, markets across the globe are crashing. That's not to say that it's the known specifics of Trump’s economic vision that's installing negativity, but this result is a bolt from the blue breeding uncertainty.

"The forecast for the world's largest economy is now very unsettled. But, like Greece crashing, China’s meltdown and the historic Brexit vote, there’s good reason to believe that markets will settle back down again before too long.

“Betting on the fallout of this election is very tricky indeed. Where and when the dollar will bottom out is anyone’s guess and plans for a December rate hike are up in the air. In the immediate aftermath, it’s gold that everybody will want to get their hands on."

"Today, the establishment is in deep shock. Even more so than after Brexit.

"What we are witnessing is the end of a period of big business and big politics controlling our lives.

"Voters across the Western world want nation state democracy, proper border controls and to be in charge of their own lives.

"I commend Donald Trump for the courage with which he has fought this campaign and I look forward to a closer relationship between the USA and the UK.

"We now have a President who likes our country and understands our post-Brexit values.

"Prepare for further political shocks in the years to come."

The bookies don’t come though this unscathed with Betway’s Alan Alger saying:

“After Leicester winning the League at monster odds and punters cleaning us out in the late hours of the Brexit vote, we could have done without Donald Trump being given the keys to the White House.

“Our odds fell in line with the polls, keeping Clinton short and luring in just a fistful of big stakes on the Democrat. We were happy to lay the tens and hundreds on Trump at juicy odds and that has hit us hard. Those who went against the experts have collected handsomely.

“Counting the losses at the moment, it looks as though at least 65 per cent of bets placed ahead of polling were on Trump and this could be a worse result for the bookies than Brexit.”