Don’t Be Fooled by Libya—This is a Failed State

Gunmen today seized Libyan Prime Minister Ali Zeidan from a hotel in central Tripoli, releasing him shortly afterwards, but making it clear that post-Gaddafi Libya is a failed state and that the government is incapable of taking full control over its oilfields and export terminals.

While the markets have been responding lately with unfounded optimism over Libya, anyone who has been privy to the intelligence briefings and executive reports from Oil & Energy Insider would know that announcements of progress emanating from the capital Tripoli are hot air. There are too many roving militias who want their piece of Libya’s fossil fuels largesse—and the government is impotent.

Nothing demonstrates this more clearly than the seizure of Prime Minister Ali Zeidan on 10 October from the Corinthia hotel in central Tripoli.

More to the point, the prime minister was apparently seized by militias linked to Libya’s Interior and Defense Ministries, which makes one ask whether he was kidnapped or arrested, or indeed whether it is even worth getting into the semantics.

His arrest was not about oil, specifically, it was in retaliation for the US special forces capture of a Libyan al-Qaeda suspect in Tripoli over the weekend. Militant groups—many of whom control various branches of the impotent government—were angered at the US capture of Abu Anas al-Libi, wanted for the 1998 bombings of US embassies in Kenya and Tanzania in which more than 220 people were killed.

Look no further than Libya’s National Congress, which was adamant that the US return the captor, which it labeled as a kidnapping and a violation of Libya’s national sovereignty.

Upon his release, Prime Minister Zeidan took to the international media, calling on Western powers to step in—again. In an interview with BBC Newsnight, Zeidan said the country was being used as a base to export weapons across the Sahel and that “the movement of these weapons endangers neighboring countries too, so there must be international cooperation to stop it. 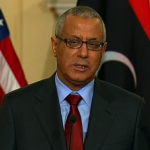 Regardless, the situation should be clear even for those Libyan enthusiasts who are under the impression that this is a functioning state. Ali Zeidan’s days are numbered without another direct Western intervention.

This is the same reason the oil cannot flow as planned.

At we noted in a September executive report on Libya in Oil & Energy Insider, the crisis began two years ago with the overthrow of Muammar Qaddafi, but in August things took a definitive turn for the worse, with armed groups seizing major oil export terminals and demanding autonomy for the eastern region. Now the crisis has reached the west where other militant formations ominously charged with guarding the country’s pipelines and oil fields are seeking to profit on the momentum of the strikers and protesters in the east.

The interim government cannot manage this crisis. It’s already been forced to compromise, agreeing earlier in September to a 20% wage hike across the board for civil servants, and including oil security forces in this mix. At the same time, the government has issued warrants for the arrest of strike organizers in the east.

While the government will not be able to enforce these warrants, the blowback for this still will be severe and will result in a violent upheaval unlike anything else in the past two years. This will reverberate throughout the already volatile Sahel region, threatening security in Tunisia and Algeria most immediately. It is also leading to a tightening of world oil supplies.