After a miserable winter of weak economic indicators (which were mostly blamed on the weather), the warmer spring weather will be a godsend for Wall Street. Unless, of course, there's more holding the U.S. economy back than cold winds and snow.

That riddle will be answered in the coming weeks, but the long-term prognosis for the U.S. economy is a little murkier. While the S&P 500 is trading at record-highs, there is mounting evidence to suggest the U.S. economy could slow down, putting the brakes on the bull market.

Naturally, it depends on who you ask and what their time frame is. Despite mounting risks, such as ongoing troubles in Ukraine, slower growth in China, and the threat of increasing rates, some predict the S&P 500 will hit 2,075 by the end of the summer. That would represent an 11.5% gain from where it currently trades and a 12.5% gain for the first half of the year. (Source: Levisohn, B., "Don't Call It a Comeback: Dow Jones Industrials Gain 120 Points, More to Come?" Barron's, January 7, 2014.)

The double-digit growth is expected to come as a result of increased investor sentiment in the U.S. economy. For starters, investors have experienced a relatively easy ride over the last year. And over the last two years, any corrections on the S&P 500 have been shallow, short, and sweet. It's the perfect recipe for ongoing enthusiasm and confidence for investors to pour more equity into the S&P 500.

It doesn't matter if the S&P 500 is overvalued, some investors only care that it keeps going up. And should first-quarter earnings of S&P 500 companies be even lukewarm, investors will become even more exuberant.

For the exact same reason, others think our faith in an overvalued S&P 500 might be a little misguided—and a little too insular. Not enough attention, it seems, is being paid to the Chinese yuan, which recently tumbled to a one-year low against the U.S. dollar.

Fear is mounting whether China, which has seen its growth slow to its weakest point since the crisis began, will pour more stimulus into the economy. 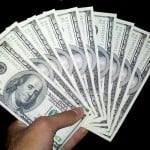 In an effort to strengthen its economy, China has indicated it is more concerned with rebalancing its budget, creating jobs, and reducing pollution than meeting its gross domestic product (GDP) targets at any cost. China set a 2014 GDP target of 7.5%. But even that might be a little high. Goldman Sachs lowered its 2014 forecast for China from 7.6% to 7.3%, and cut its 2015 forecast to 7.6% from 7.8%. (Source: Harjani, A., "Goldman Sachs slashes China growth outlook," CNBC web site, March 19, 2014.)

In addition to an economic slowdown in China, there are a number of plausible factors that could pose a serious risk to the U.S. economy, including ongoing geopolitical tensions, the chance that growth will turn negative in Germany (the world's fourth-largest economy), and European deflation.

The diverging opinions show that no one really knows how the U.S. economy is going to react over the coming months. And abject confusion rarely leads to anything positive.

So where can investors turn? If you're bullish on the S&P 500, you could look at the SPDR S&P 500 (NYSEArca/SPY) exchange-traded fund (ETF). If you think the S&P 500 is primed for a major correction, you could consider an ETF like ProShares Short S&P500 (NYSEArca/SH).

This article Double-Digit Gain or 30% Crash: How to Profit from S&P 500 No Matter Where It Goes by John Paul Whitefoot, BA was originally published at Daily Gains Letter.