We explain below exactly what this reconfiguring (and the further change in the Dow Divisor) encompasses and exactly how it will affect the performance of the index. Read on, its significance is absolutely dramatic! This manipulation of the performance of the Dow 30 has been going on since 1928 and it was further denigrated this week with a 3 constituent swap which will, in effect, assure that the Dow 30 continues to rise in the long term.

On September 23, the Dow gets the biggest facelift since 2004 in one fell swoop with the removal of 3 company constituents:

And the addition of:

These three additions are expected to have greater future price performance appreciation. (Read: The New Dow Stocks in Three Charts).

What is even more striking is that the three companies removed from the index have a low share price (HP is trading at an approximate price of $22, BoA at $14 and Alcoa at $8 for a sum total of $44) while the three stocks added have a high market price (Goldman Sachs at $164, Nike at $67 and Visa at $184 for a sum total of $415). Of course there is the Dow Divisor which supposedly ensures that the value of the Dow Jones with the new shares is the same as the value of the Dow Jones with the old shares but this effect is only short-term as, in the long-term, the profits of the higher priced stocks will be greater/stronger than those of the weaker stocks that they replaced.

February 19, 2008: Bank of America Corp. and Chevron Corp. replaced Altria Group Inc. and Honeywell International. Altria was split into two companies and was deemed no longer suitable for the Dow.  Honeywell was removed from the Dow because the role of industrial companies in the U.S. stock market in the recent years had declined and Honeywell had the smallest sales and profits among the participants in the Dow.

April 8, 2004: Verizon Communications Inc., American International Group Inc. and Pfizer Inc. replace AT & T Corp., Eastman Kodak Co. and International Paper. AIG shares had increased over 387% in the previous decade and Pfizer had an increase of more than 675& behind it. Shares of AT & T and Kodak, on the other hand, had decreases of more than 40% in the past decade and were therefore removed from the Dow. 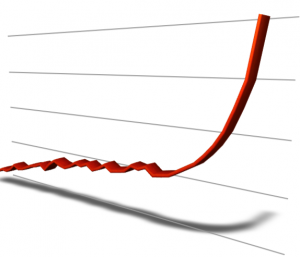 In many graphs the y-axis is a fixed unit, such as kg, meter, liter or euro. In the graphs showing the stock exchange values, this also seems to be the case because the unit shows a number of points. However, this is far from true! An index point is not a fixed unit in time and does not have any historical significance. An index is calculated on the basis of a set of shares. Every index has its own formula and the formula gives the number of points of the index. Unfortunately many people attach a lot of value to these graphs which are, however, very deceptive.

An index is calculated on the basis of a set of shares. Every index has its own formula and the formula results in the number of points of the index. However, this set of shares changes regularly. For a new period the value is based on a different set of shares. It is very strange that these different sets of shares are represented as the same unit. In less than ten years twelve of the thirty companies (i.e. 40%) in the Dow Jones were replaced. Over a period of sixteen years, twenty companies were replaced, a figure of 67%. This meant that over a very short period we were left comparing a basket of today’s apples with a basket of yesterday’s pears.

Even more disturbing is the fact that with every change in the set of shares used to calculate the number of points, the formula also changes. This is done because the index, which is the result of two different sets of shares at the moment the set is changed, must be the same for both sets at that point in time. The index graphs must be continuous lines. For example, the Dow Jones is calculated by adding the shares and dividing the result by a number. Because of changes in the set of shares and the splitting of shares the divider changes continuously. At the moment the divider is 0.130216081 but in 1985 this number was higher than 1. An index point in two periods of time is therefore calculated in different ways:

In the 1990s many shares were split. To make sure the result of the calculation remained the same both the number of shares and the divider changed. An increase in share value of 1 dollar of the set of shares in 2013 results is 7.7 times more points than in 1985. The fact that in the 1990s many shares were split is probably the cause of the exponential growth of the Dow Jones index. At the moment the Dow is at 15,191 points. If we used the 1985 formula it would be at 1,978 points.

The most remarkable characteristic is of course the constantly changing set of shares. Generally speaking, the companies that are removed from the set are in a stabilization or degeneration phase. Companies in a take off phase or acceleration phase are added to the set. This greatly increases the chance that the index will rise rather than go down. This is obvious, especially when this is done during the acceleration phase of a transition. From 1980 onward 7 ICT companies (3M, AT&T, Cisco, HP, IBM, Intel, Microsoft), the engines of the latest revolution and 5 financial institutions, which always play an important role in every transition, were added to the Dow Jones.

In that case a better guide would be to look at the number of people in society that use food stamps today – That is the real truth!

The first part of this article refers to the article Manipulation of the Dow Jones: This is how it works! (Dutch) [1] written by Ronald Hendrickx of beurs.com.