Although the data supplied by 5,000 estate agents and surveyors from all 2,300 postcodes in England and Wales shows that headline prices fell by 0.1%, Hometrack said that a steady growth in demand over the last six months together with a 20% rise in sales agreed over the last 2two months had stabilised the market.

Interestingly, their findings show that recently sellers are only having to drop their asking prices about 7% in order to achieve a sale. This is at odds with the difference between Rightmove asking prices and the prices the lenders are seeing as discussed here.

The average time that a property is remaining on the market gas also fallen marginally, from 9.7 weeks in June to 9.4 weeks.

As you would expect there is also a wide disparity in house price changes in different areas. Prices in the South West dropped by about 0.6% but increased 0.3% in London.

This comes as little surprise as Lloyds TSB figures indicate that property closer to the site of the 2012 Olympics have seen substantial rises in their prices, surprise, surprise. According to Lloyds the price of those properties has gone up by an equivalent average of Â£192 a week since the official announcement in 2005 that London was to be the 2012 Olympics host city. then there is the state of sterling and how cheap London prices now look to foreign buyers. 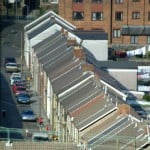 But across England and Wales as a whole, prices only moved higher in 8% of postcodes.

There was also a 1.1% rise in new buyers registering with agents together with sales agreed up by 9.6% on last month, which was already up on May by 10.7%.

House prices – the gap between London and the rest

The Tale of the Fisherman's Cottage