Globally renowned primate expert Dr Jane Goodall has fired off an e-mail to Alexandre de Juniac, the chair and chief executive of Air France, urging him to end the company's shipments of monkeys to laboratories around the world, where they face painful, invasive and deadly experiments. Air France is the only remaining major airline participating in what the animal conservation specialist described as a "cruel trade". Dr Goodall, who turned 80 this year, will be speaking in Paris 14 to 18 May.

"The monkeys Air France transports have been traumatically captured in the jungle or are the young offspring of mothers who were taken from the wild and forced to breed at horrendous monkey farms", Goodall explains in her e-mail. "Once Air France delivers these monkeys to laboratories … they are deprived of everything meaningful and necessary for them to be happy. As would be the case in humans, this treatment leaves them desperately lonely, traumatized and psychologically damaged." 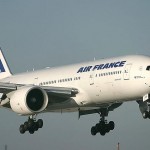 Goodall, whose career in conservation spans decades, is regarded as one of the world's leading authorities on primate behaviour. For her environmental and humanitarian work, she has been named a Dame Commander of the British Empire and a United Nations Messenger of Peace and has been recognised by France, Japan, Spain and Tanzania, among other nations. Goodall joins a growing list of animal experts and celebrities – including Chris Packham and James Cromwell – who are calling on Air France to stop transporting primates to laboratories.

The full text of Goodall's e-mail is available below:

I was disturbed to learn recently that Air France is the last passenger airline in the world that continues to transport monkeys destined for experimentation.  As I understand it, Air France ships thousands of monkeys each year from Asia and the island of Mauritius to laboratories and laboratory suppliers in France, the United States, and other countries.  I implore you to end your involvement in this cruel trade.

You may not know this, but in the wild, long-tailed monkeys—the species Air France most commonly ships to laboratories—live in warm rain forests near the water and travel up to a mile a day playing, foraging for food and socializing with one another. They live in groups of up to 30 and at night, they sleep huddled together high up in the trees. Babies are nursed by their mothers until they are more than a year old and females remain in the same social groups for life with their mothers, daughters, sisters and cousins. These social, intelligent primates can live to be more than 30 years old.

Air France is unfortunately ensuring that they don’t get to experience any of this.

The monkeys Air France transports have been traumatically captured in the jungle or are the young offspring of mothers who were taken from the wild and forced to breed at horrendous monkey farms.   One recent expose of a supplier in Mauritius that Air France apparently services showed babies being roughly ripped from their mothers and crudely tattooed for identification while fully conscious.

Once Air France delivers these monkeys to laboratories on long and terrifying flights, they are deprived of everything meaningful and necessary for them to be happy.  In most cases, they are confined by themselves in small, desolate cages.  They are denied physical contact with other monkeys.  The only time they are removed from their cages is when someone is coming to subject them to a distressful or painful procedure.  As would be the case in humans, this treatment leaves them desperately lonely, traumatised and psychologically damaged. They often rock, spin, cry out and even self mutilate.

These routine, miserable conditions are the backdrop to dreadful experiments in which the monkeys are poisoned, cut into, restrained, starved, shocked and infected.

All other major airlines—including Lufthansa, Aer Lingus, China Southern Airlines, United Airlines, Alitalia, Delta Airlines, British Airways and American Airlines—have made the compassionate decision to end their involvement in this business.   I hope that you will take swift and decisive action to do the same.