With students returning to university after the summer break, the first University Quality of Student Life Survey by Lloyds Bank has found that students at Durham University have the best quality of life. The survey aims to quantify where student satisfaction and living standards are highest by ranking individual institutions' performance across a range of indicators.

• Nine out of ten students are satisfied with their course, higher than the national average (85%)

• 92% of final year graduates find employment (or carry on studying), with an annual full time median salary of £22,000

• Durham holds some of the best sporting facilities amongst British universities, with Durham's sports clubs coming in at number two in the BUCS Overall Championship in 2012/13

• Durham students rate their social life as one of the best in Britain, while living with the lowest crime rate in university towns

• However, being a student in this historic city comes at a cost with some of most expensive accommodation (both university owned, sponsored and private rentals) amongst British universities

In second place is Loughborough University. Set in Leicestershire, this university scores heavily on sporting excellence. A total of 88% of students are satisfied with their course, while over 92% find employment or another course after graduating as well as students reporting high levels of satisfaction with their social life and value for money shops, bars and other amenities. Loughborough students also live in an area with a relatively low crime rate and on a night out, they have close to 100 bars and pubs to choose from.

"Taking a wide range of indicators into account, students at Durham University enjoy the best quality of student life. Durham students are satisfied with the quality of their course, which appears to provide them with excellent employment prospects, but they also rate their social life highly and live in a low crime environment. On the downside, accommodation costs are on the high side.

"The top ten universities for the best quality of student life are a mix of the old, such as Oxford and Cambridge, and the relatively new such as Newcastle and Bath. They all score well on course satisfaction, good employment prospects and high salaries. Many of them are also rated highly for a good social life, particularly in the provincial cities in the north."

Top ten – a mixture of the old and the new

The top ten institutions with the best quality of life are a mix of the ancient universities of Cambridge (3rd place) and Oxford (5th)) and those in the major provincial cities of Newcastle (4th), Nottingham (7th), Manchester (8th) and Sheffield (9th). The universities of Bath (6th) and Swansea (10th) make up the remaining two spots in the top ten. (See Table 1)

Most of these universities score strongly with final year undergraduates being satisfied with the quality of their course and an average of 93% finding employment (or another course) on completion. Many of them earn relatively high salaries. For example, Cambridge graduates earn a median salary of £25,800 followed by those from Oxford (£24,800). Many of these institutions have excellent sporting facilities as measured by their position in the BUCS Overall Championship. Students at the universities of Newcastle and Sheffield are the happiest with their social life and the city of Manchester has almost 250 pubs to choose from – the highest amongst university towns.

Students of Swansea University and the University of Northumbria (11th in the ranking) not only have an excellent quality of life but living does not come at a high cost with the least expensive university owned or sponsored accommodation in Britain.

Satisfaction with the university experience

University of Bath was rated as providing the most satisfactory university experience with 94% of final year students satisfied with the quality of the course1; significantly above the national average of 85%. Bath finished narrowly ahead of a group of universities ranging between 90% and 93% in this year's National Student Survey, including the universities of East Anglia, Exeter, Keele, Cambridge and Oxford.

In 2012/13 students at the University of Northumbria had the cheapest institution owned or sponsored accommodation2, paying an average £1,500 per academic year; followed by the universities of Swansea (£2,500), Teeside (£2,800) and Staffordshire (£2,900).

The five universities with the most expensive university owned or sponsored accommodation are all in London; with the average annual cost ranging from £5,900 at University College to £8,250 at City University.

Undergraduates at Swansea University had the least expensive rooms in private rentals3 with an average annual cost of £2,550; followed by the universities of Staffordshire (£2,300), Salford and Cumbria (both £2,550). The most expensive private rooms are occupied by students at the London School of Economics (£7,000).

96.2% leavers from Glasgow Caledonian University from the academic year 2011/12 indicated they were working or studying4 – the highest in Britain and above than the national average of 90.3%. Glasgow Caledonian is closely followed by Derby (96.1%), Newcastle (95.2%), Cardiff Metropolitan (95%) and Cambridge (94.9%). 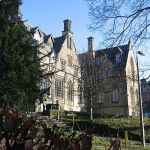 The quality of sports facilities is measured indirectly by where the university ranked in the British Universities and Colleges Sports (BUCS) Overall championship6 in 2012/13; the higher the ranking the better the facilities are assumed to be. Loughborough University had the highest number of points, followed by Durham, Birmingham, Bath and Exeter.

The University of Newcastle and University of Sheffield came out joint top for the best social life7 in a survey on student experience. These two northern universities are followed by the universities of Leeds, Cardiff Metropolitan and Loughborough.

Also in the same survey, students at Cardiff Metropolitan and Dundee University had access to the cheapest shops, bars and other amenities8.

However, students in the city of Manchester (covering University of Manchester, Metropolitan and UMIST) had 245 pubs and bars9 to choose from on a night out – the highest in any of the university towns in the survey.

Table 2: University with the Best Quality of Life in each category 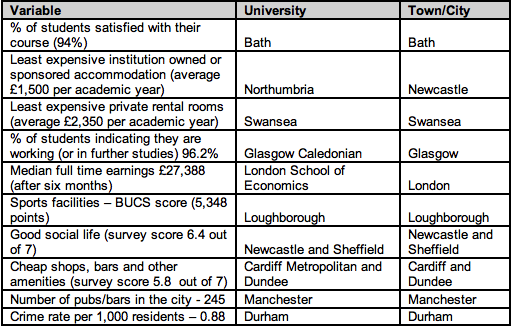