E-Waste is fast becoming one of the most pressing environmental issues that our planet is facing, yet appears to be slipping under the radar in terms of public awareness. The increasing popularity of gadgets, such as smartphones and tablet computers, has lead to a surge in devices being purchased and discarded — especially with their planned obsolescence and relatively short lifecycles.

The vast majority of electrical appliances and devices are discarded with every day household rubbish, which ultimately results in them hitting landfills or being filtered out for recycling abroad, which usually takes place in a developing nation. Unfortunately, the recycling practices used are rarely as efficient as you would think. The electronics are usually just dumped in a predefined location, much like a rubbish tip, and then stripped down by a team of locals. Many parts of the device, such as the circuit boards and wiring will be melted down for the precious metals that they contain, releasing toxic gases into the air during the process.

Additionally, while the electronics are waiting to be stripped down they are contaminating the soil that they sit on, which ultimately leads to contaminated groundwater. This is a huge issue as that same groundwater is usually the primary source of water for local towns and villages in developing nations and also has devastating effects on the fertility of the soil for the sustainable growth of crops. 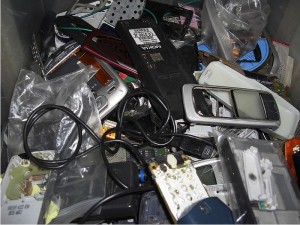 With so many devices now in circulation it will be a tall ask to ensure that the situation does not spiral out of control, especially as we have now become so dependent on technology. The European Union have taken measures to ensure that e-waste within their jurisdiction is handled as responsibly as possible by implementing the WEEE directive, which dictate the way in which e-waste must be transported and disposed of. It's also worth noting that every major e-waste producing country in the world except the United States of America has signed up to the Basel Convention, which is a strict set of guidelines and commitments that have been agreed to. So while this issue is still far from manageable and barely noticed by the masses, the worlds governments have begun to sit up and take notice.

Gregory Bassett of electronic recyclers Bozowi said "the governments will do what they can but the simple truth is that unless the people themselves start taking notice and recycling their old devices properly then we will be in big trouble in the very near future". Bassett also said that a lot of the blame must fall on the manufacturers of the products, urging people to put pressure on them. "Companies like Apple are churning out millions and millions of devices every year but where do they end up? It's no secret that they force their customers to upgrade with planned obsolescence either, so just think of how many more devices that has sent to landfill over the last decade."

Of course it's not just Apple that need to reconsider their environmental impact, as almost all of their competitors will be having a huge negative effect on the planet. All of the major electrical manufacturers need to be held accountable and it needs to happen before it's too late.

Green Building: Go for the Globe, Good for the Construction Industry