Free trade with the United States could lead to millions of pounds of exports to other parts of the world, according to EBLEX.

Peter Hardwick, head of trade development for EBLEX, the beef and lamb division of the Agriculture & Horticulture Development Board (AHDB), highlighted the potential wider benefits the EU-US Transatlantic Trade and Investment Partnership (TTIP) could bring to the beef and lamb sector at a meeting chaired by Food and Farming Minister David Heath and Cabinet Minister Kenneth Clarke.

The UK currently has no US Department of Agriculture (USDA)-approved beef plants for export. Negotiations on the EU-US TTIP will include tackling differences in regulations, standards and certification, issues central to the future export of beef and lamb to the US from the UK. The Westminster roundtable event was organised for industry stakeholders to highlight how to maximise the potential of any future agreement.

It has been estimated that an agreement could enable EU companies to sell an additional â‚¬187 billion worth of goods and services a year to the US. It has also been suggested that a free trade deal could lead to a 28 per cent increase in EU exports to the US, with the Government anticipating that an agreement could add Â£10 billion annually to the UK economy. Eliminating current trade barriers to the US could boost the UK’s agri-food sectors by roughly Â£285m. The first round of talks took place in Washington DC in July, with negotiating groups setting out approaches and aims in a number of areas the TTIP is due to cover. The second round of negotiations is due to take place in Brussels in October.

Mr Hardwick said: “We have a responsibility to help drive the efficiency and profitability of the beef and lamb sector and anything that affects that is relevant to us. The EU-US TTIP is a potentially positive move for the sector and we were delighted to be invited by Ministers Heath and Clarke to discuss the opportunities that the partnership could present, ahead of the second round of negotiations. At the same time we need to highlight the risks of significantly reduced tariffs and increased access to the EU without full regard to the effect this might have on our own producers who operate with higher regulatory costs in areas such as animal welfare, the use of hormones, GM and environmental legislation.

“Specifically for the beef and lamb sector, the negotiations are seeking to address a number of issues, including getting as close as possible to removing technical barriers on ruminant meat. While there are high-value, opportunities for beef and lamb in the US market, where we estimate the potential market to be in excess of Â£60 million per annum, there are also wider implications of what a future agreement could bring for our trade relationships with other Third Country markets.

“These countries often take their lead from what the US does and, although it is by no means guaranteed, an agreement between the EU and US would almost certainly pave the way for positive outcomes when we negotiate on market access for our products with these other countries.

“However, to give some perspective, these are complex matters that don’t get resolved in the blink of an eye. Should an agreement be reached, it would allow us to enter into a process with the US authorities to secure individual plant approval for exports. As it stands, there are currently no USDA-approved beef plants in the UK and exporting to the US will therefore not be immediate. A key issue to be resolved will be recognition of equivalence on plant standards. However, ongoing talks are certainly a step in the right direction.” 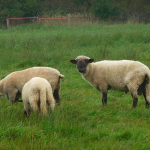 Sheep by 4028mdk09 via Wikimedia Commons

Mr Heath said: “A new trade and investment partnership between Europe and the USA is immensely important for the future prosperity of the UK food and drink industry. With almost 2 billion Euros traded between us every day already, it could be the biggest trade deal in history. A new deal needs to keep regulations to a minimum and remove the barriers which prevent our farmers and producers from tapping into the huge US market.”

Commenting after the meeting, Mr Clarke said: “A successful EU-US trade tie up will mean a huge boost to many British food and drink businesses, including to farmers. British lamb and beef is renowned for its quality right across the world. The trade deal means that farmers should benefit from the collective bargaining power that comes with membership of the European Union and could see them gain significantly improved access to lucrative American markets. This is just one more reason why it is right for Britain to remain a member of the European Union.”

TheCityUK: get involved in Review of the Balance of Competencies