– ECB: institutions should become subject to resolution only after a supervisor has assessed them as "failing or likely to fail"

– ECB: changes to the proposed regulation have been made to ensure that Article 114 of the Treaty is a possible legal basis for establishing the SRM

Yesterday the European Central Bank (ECB) published its legal opinion on the Single Resolution Mechanism*. This opinion was issued at the request of the Council of the European Union and the European Parliament.

The ECB fully supports the establishment of a Single Resolution Mechanism. It believes that centralised decision-making on resolution matters will strengthen the stability of Economic and Monetary Union and that the SRM will provide a necessary complement to the single supervisory mechanism.

– A single authority with decision-making powers;

– A single fund financed ex ante by the banking sector.

The ECB considers it crucial that the responsibilities of the resolution and supervisory authorities are kept distinct. The ECB, or the national competent authorities, in line with the Regulation on the single supervisory mechanism, should be solely responsible for assessing whether a credit institution is failing or likely to fail.

The supervisory assessment will therefore be a necessary precondition for putting an institution into resolution. 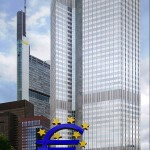 The ECB welcomes the EU Council's call to adopt the legislation within the European Parliament's current term. Furthermore, it strongly supports the envisaged timeline for the SRM to become effective as of 1 January 2015. Once the single supervisory mechanism is operational and supervision is elevated to the European level, the same needs to happen for resolution.

The ECB also supports an earlier implementation of the bail-in tool, which is a key element of the Bank Resolution and Recovery Directive.

The ECB notes the efforts undertaken to introduce the changes necessary to be able to use Article 114 ("approximation of national provisions") of the Treaty on the Functioning of the European Union as a possible legal basis. This would make the establishment of the SRM possible without the need for a Treaty change.

The ECB's opinion states that it is better to maintain a clear functional separation between supervision and resolution, thereby avoiding potential conflicts of interest. The ECB recommends participating in the executive as well as plenary sessions of the Single Resolution Board as an observer.

Pace of Growth Shifts Down a Gear