Most readers, I’m sure, are aware of how weak the eurozone has been over the past few years. That area has had essentially no economic growth at all for quite some time.

But now, eager to find any investment opportunity, some investors are looking at the eurozone as a value play, hoping for a turnaround and a possible acceleration in economic growth. These thoughts of investing in the eurozone, however, are based primarily on hope. As I said, there are no signs of economic growth emerging at all. But you don’t have to take my word for it…

Recently, the European Commission issued its forecasts and, well, the news wasn’t good.

According to the European Commission, real gross domestic product (GDP) growth in the eurozone on an annual basis this year will be -0.4%—meaning contraction. For 2014, estimates are for a mere 1.1% growth, and in 2015, that number only increases to 1.7%. (Source: “Autumn 2013 Economic Forecast,” European Commission, November 5, 2013.)

I’m sure this isn’t breaking news to my readers: another year, another weak level of poor economic growth in the eurozone.

Capital formation I can understand; money can easily move to areas that offer the best opportunity. However, expecting private consumption to drive growth in this region surprises me.

If you think America is having a tough time with unemployment, you obviously haven’t been to the eurozone lately. The region has massive levels of unemployment and no income growth at all. The report itself forecasts that the eurozone will have an unemployment rate of 11.8% in 2015! 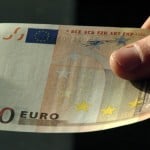 Are we living in a world where unemployment of 11.8% somehow magically becomes a positive driver for economic growth? Call me crazy, but I don’t think that’s a recipe for a burst in consumer spending.

But it doesn’t end there: the report specifically states the forecast is dependent on domestic demand being the main driver of economic growth “against the background of a weakened outlook for EU exports to the rest of the world.” (Source: Ibid.)

The commission is literally saying that it forecasts a lack of economic growth throughout the rest of the world, yet the eurozone will be so strong domestically, that the region can drive economic growth all by itself.

Am I missing something? When I think of economic growth, the eurozone is certainly not on the top of my list.

Below is a chart of the eurozone exchange-traded fund (ETF) the Vanguard European VIPERS (NYSEArca/VGK). 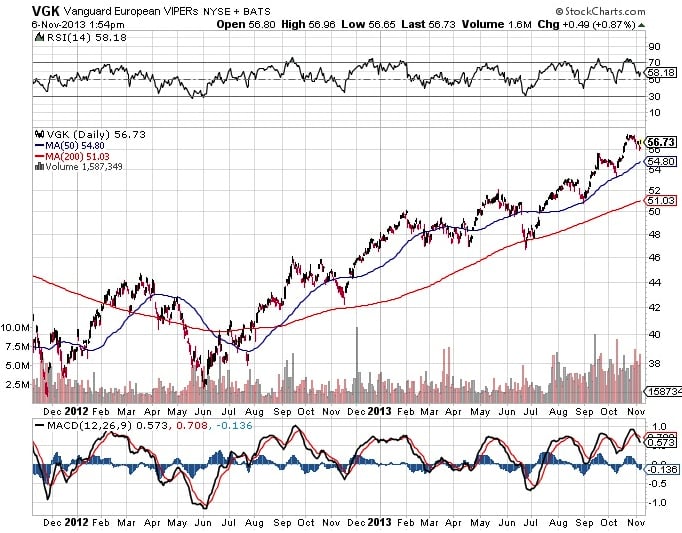 By looking at this chart, you would think the eurozone is on fire with a huge increase in economic growth. However, the reality is that the eurozone would be lucky to have positive economic growth this year—to even achieve one-percent economic growth in 2014, all its stars would need to align perfectly. And again, unemployment is still well into the double digits.

Let’s face it: looking at this chart, it’s apparent the market has moved up far ahead of the actual data, which are still showing a very weak economic growth level for the region. Clearly, investors have become far too optimistic and are hoping for better conditions.

I understand that as an investor, you would like to get in “ahead” of the crowd. But with no sign of unemployment dropping and a lack of fundamentals to support the seemingly skyrocketing market, the building blocks of a strong, long-term investment are missing.

If you have money in a fund with eurozone investments, now would probably be a good time to take profits.

This article Economic “Growth” in Eurozone a Hoax? by Sasha Cekerevac, BA was originally published at Investment Contrarians

Devolution proposals must be fair to both sides of the border

Budget has sting in the tail for the smallest companies