Being an economist has the occasional perk. One of them is travel – this week, I am spending most of my time in the US, primarily in New York. Every time I come to this city I discover something new about it, from the run-down pizza parlour near the office to the bar hidden away just off West Broadway. But one of the most interesting things about a trip to the Big Apple is the attitude of New Yorkers.

New York, like Washington and Los Angeles, is about as representative of the US as London is of the UK. People living in any of these cities can forget what life is like for everyone else, as it is all too easy to get caught up in the hustle and bustle of everything that is going on. At the same time, New York is one of the two global financial centres that dominate capital markets (the other one being London), so events that unfold here really can be felt right the way around the world.

This visit, it has to be said, did not start off that well. Arriving over the weekend, the passport queue was not quite at Heathrow-esque proportions, but was not far off. At passport control, the immigration officer and I had an interesting conversation about whether the UK or US was worse off, and the exact role immigration had played in getting us there. (I was then custom-checked by a recent Indian immigrant who rather sweetly read out the same list of questions twice.) The hotel staff were cheery, as they always are, but walking about the City yesterday I got the distinct impression that New York is still, in some sense, holding its breath.

This is partly because no-one quite knows what is going to happen to the US economy over the next year or so. With Romney having now tied up the Republican nomination, the election is already dominating people’s thoughts – Obama is in town this week to speak at a women’s college and raise some money. Unfortunately, this means the increasingly partisan nature of American politics is likely to intensify, if anything, in the months ahead.

This is definitely not good news for the world’s largest economy. While British politicians spar over the pace of deficit reduction, the gap between the Coalition government and Labour is really not that large in macroeconomic terms – maybe one or two per cent of GDP in a financial year, if that. But the stakes are somewhat higher here in the US. 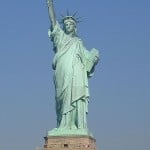 Statue of Liberty by featherboa

Republicans and Democrats are famously at loggerheads about the deficit. While S&P’s downgrade of the US economy may have had little lasting macro impact, it did serve to raise the stakes. The main problem is that the deal that was finally reached on the debt ceiling last year imposes a harsh set of ‘default’ cuts if no Budget deal is reached this time around. Precise estimates vary, but if politicians cannot broker a deal then the US deficit could be cut by almost 4% of GDP in 2013. That pace of fiscal tightening, against a healthy but not strong recovery, would not bode well – it is entirely possible that such a pace of deficit reduction could push the US back into recession. With job creation still below par, and long-term unemployment high, the damage would be considerable. Needless to say, the impact on the rest of the world would be pretty bad too, particularly if Europe was still reeling from a Greek catastrophe.

The New Yorkers that I have spoken to seem pretty well informed about this scenario. Most have bemoaned politicians’ inability to reach even a semblance of a compromise. Here, as in other countries, there is the growing sense that the political classes are not really delivering what they should in terms of guiding the economy and providing income and security for ordinary citizens. At the same time, the rise of the Tea Party (albeit really outside New York) suggests a hardening of views towards the edges of the political spectrum, making compromise even harder.

This is still clearly a long way from anything like Greece, where parties cannot work together even to save their country. But in the US, as elsewhere, it feels like people are increasingly annoyed with how things are (not) working. I doubt this will have much impact on the coming US election, beyond some finessing of messages from the two main camps. But the sense of frustration is growing.

General election on May 6th – or is it?