Economy might be growing but public confidence in UK’s prospects is not, says CISI survey

While the UK economy is growing, public confidence in the country’s prospects is not, a CISI survey shows.

Of 600 respondents to an online survey, 60% said they were more optimistic for the country’s prospects than three months ago.
When the CISI last ran the survey in autumn 2013, the proportion of those who considered that the outlook was brighter was 1% higher, at 61%.

The stalling in the level of confidence follows a doubling in optimism from the spring 2013 survey to the poll last autumn.

Concern that the housing market is overheating was highlighted in the survey as the number one threat to the UK economy, which grew by 0.8% in the first three months of the year.

One contributor commented: “The further inflation of the housing bubble that was never allowed to burst in 2009 is likely to lead to interest rate rises. This risks choking the nascent recovery in the real economy.”

Another said: “The economy is vulnerable to any shocks to the housing market.”

However, on a brighter note, another respondent said: “I’m very optimistic and investing for the future.”

The Institute has run a twice-yearly poll since spring 2012 to gauge opinion about the state of the economy.

To take part in the latest CISI survey, see cisi.org. 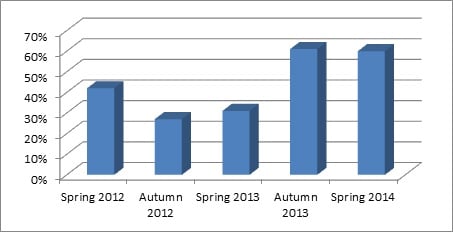