In his latest video, Veitch manages to capture evidence of the heavy handedÂ tacticsÂ of intimidation used by the police who may at some stage be told to enter the sovereign territory of another country at the behest of the British Foreign Secretary, WilliamÂ Hague.

The video shows the police requesting protesters move from directly outside the Ecuadorian Embassy without making a direct order to do so then moments later what appears to be an unprovoked and vicious arrest of a protester ensues (video below).

Veitch uses his trademark megaphone to bring to account the questionable actions of the police whilst adding his own brand of satire and humour to a serious situation that could have major implications for the safety of British diplomatsÂ acrossÂ the globe should the police arrest Assange whilst on Ecuadorian territory. 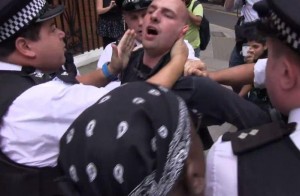 Julian AssangeÂ has been granted asylum by the President of the Republic of Ecuador, Â Rafael Correa and remains in the Embassy much to the annoyance of the British Government who have been under increasing pressure from the United States to storm the embassyÂ and deport Assange to Sweden where he faces trial for rape, an accusation that Assange has vehementlyÂ denied.

From Sweden Assange will almost certainly be deported to US and could conceivably face the death penalty for releasing damning Â information that has shamed the foreign policies of the United States viaÂ Wikileaks.

At a time when the police force is facing wholesale Â privatisationÂ officers are being asked to do more and more tasks that remove public sympathy for the plight of serving officers that have been abandoned by the Winsor report.

The British public can only stand shoulder to shoulder in protecting the police from privatisation from a government that has lost all reason as soon as the police protect the people from the government.