Ecuador is at an environmental crossroads

Ecuador has given the world a choice, pay them $60 million by December and they will not allow oil drilling in one of the most environmentally diverse areas of the world.

Ecuador has benefited in the past from the oil industry having earned $130 billion from over the decades and now gets 40% of its income from it.

But, according to the Guardian, another huge oilfield has been located under the Yasuni national park, which is home to some of the most diverse flora and fauna in the world.

Extraction of this oil from the region would cause untold devastation and destruction of vast tracts of unspoilt environmentally rich land.

As the Guardian report says ‘One six-square-kilometre patch of YasunÃ­ – chosen by scientists almost at random – was found to have 47 amphibian and reptile species, 550 bird and 200 mammal species living there. Another patch of land in the park breaks all the world records for bats and insects. More tree species grow in a single hectare of rainforest in YasunÃ­ than in all of North America. A single hectare of rainforest there may contain as many as 100,000 insect species and most of the 2,000 species of fish known to live in the rivers of the Amazon region are believed to be there.’

This oil find has ‘terrified’ Ecuador’s oil minister Alberta Acosta. The country could use the money to advance and continue developing, but at a devastating cost to its own environment.

Acosta says that extraction of the oil ‘…would lead to contamination, deforestation, extinction of cultures and destruction of social structures. It would need a vast infrastructure including roads, river ports, tracks, airstrips. Villages would have to be constructed, pipelines laid and millions of tonnes of contaminated waste buried.’ 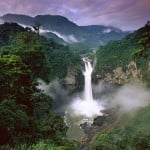 Then there is the question of all the pollution, corruption, crime and violence that follows the oil industry into poorer countries. This is known as the ‘oil curse’ that leaves the poor country poor and the oil interlopers extremely rich.

Another way had to be found.

So the choice for the rest of us is, either oil business as usual or contributing to the Yasuni Ishpingo Tambococha Tiputini (ITT) Trust Fund [1].

The ITT fund has been set up to receive money from a wide range of contributors in support of a permanent decision by Ecuador to forego drilling for oil in Yasuni.

This would not only save the region from almost certain total destruction it would also stop the emission of approximately 407 million metric tons of carbon dioxide into the world’s atmosphere.

Perhaps this is a concept that should be applied across the planet, with richer nations paying to protect environmentally unique places rather than pillaging them for what they and their rich companies can get.

A dinosaur with ‘mojo’

First successful organ donation from newborn carried out in UK