Labour leader, Ed Miliband has set out his vision for 2012 by taking a collection of soundbites, throwing them together and calling it a new year message.

The 'new year message' is probably one of the most tedious pieces of party political propaganda of the 21st century where the absence of any critical thinking is the only notable point of reference in what reads like a plot-less funeral lament for Ed Miliband as Labour leader.

Miliband said "My party's mission in 2012 is to show politics can make a difference. To demonstrate that optimism can defeat despair" without actually giving any idea of how Labour would make a difference in the real world or how to instil optimism in the populous, but note the "optimism can defeat despair" soundbite which is probably one of the better soundbites of the message

The New Year's message was full of the non-polemic rhetoric expected from an opposition leader whose days as leader are numbered, but in fairness to Ed he did say that Britain would expect a renaissance in the industrial sector as opposed to the service sector in what can only be described as a disingenuous nod to what new Labour perceives as theÂ  'embarrassing socialist left'.

This strained nod to the left is as awkward a gesture as it is empty, just look at the last Labour government's exuberance towards the banking industry within the service sector for reference.

The sheer hypocrisy of Ed (I just sat back and said nothing whilst Gordon Brown drowned the nation in future debt and encouraged risk by bankers but I will blame all the nation's financial woes on the Conservative/Lib Dem coalition) Miliband. 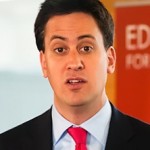 One of the parts of the message which gave great insight into Labour's rejection of socialism lay very much in Ed's call for "responsible capitalism" making a call for practical socialism conspicuous by it's absence.

Ed came up with (or at least someone came up with) numerous vacuous gems of criticism against the coalition government without providing any explanation of the means to which he will actualize any change.

The Wallace (from Wallace and Gromit) lookalikeÂ  said "It suits the current Conservative-led government to go along" with the idea that Britain is "in the grip of forces" outside it's control without identifying the forces or nature of grip……more meat on the bones of a decomposing squirrel's testicle.

"When they are just starting out in life, they should feel a sense of hope."…..where is the mention or at least outlay of any policy to facilitate hope?

"we will always seek to do politics in a different way" …...cringe-worthy soundbite.

Aside from the lack of any practical application of policy to tackle the negative events of the past 12 months Ed did manage to succeed in doing one thing in his speech and that is ensuring that David Cameron sleeps well at night, safe in the knowledge that Labour do not pose any threat at the next general election.

Stockpile petrol seems to be the government suggestion