Celebrated artist Ed Ruscha has committed to donate to the national collection one impression of all future prints he creates in his lifetime. Ruscha (b.1937) is widely regarded as one of the world’s most important living artists with a career spanning six decades. These new works will be gifted to Tate and will allow public museums around the country to stage exhibitions of his extraordinary works on paper.

The donation has begun with a selection of eighteen recent works which reveal Ed Ruscha’s inventiveness as a printmaker, as well as reflecting his interest in signs and signage, his engagement with his hometown of Los Angeles, and his humorous approach to language. Prints such as Jet Baby 2011, Wall Rocket 2013 and Sponge Puddle 2015 show mountainous landscapes with sun-lit, snow-capped peaks, overlaid with texts in the iconic typeface devised by the artist himself. Other works make literary references to American writers, such as Mark Twain Quote 2012 and That Was Then, This Is Now 2014, named after the S E Hinton novel. The artist’s interest in the power of language is a consistent theme in his work, from the opening words of the US constitution in We The People 2012, to vernacular expressions such as Real Deal and Zoot Suit 2014. 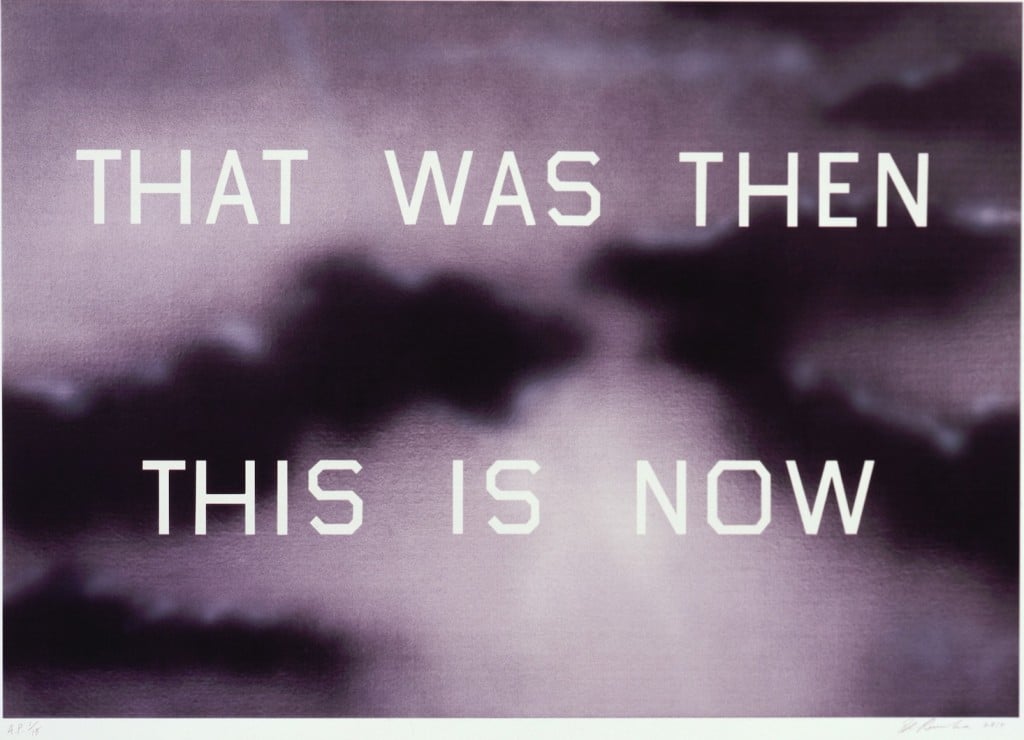 Ed Ruscha – That was Then This Is Now, 2014, Lithograph on Paper. Presented by the artist to Tate for ARTIST ROOMS 2015 © Ed Ruscha

Ruscha is renowned for his relationship with the city in which he has lived and worked for decades. Produced to benefit Project Angel Food – a charity that delivers free meals to those battling critical illness across Los Angeles – Angel 2014 demonstrates his appropriation of signs and logos for public good, whereas Music 2014 was made to commemorate the 50th anniversary of LA’s Music Center. Works like For Sale and Dead End 2014 also take their inspiration from the city, in this case the ubiquitous advertising signs and warning notices that populate the urban landscape.

‘It is a great honour to know that Tate will be a home to a collection of my editioned works.’

‘This is rare and generous commitment, not to mention a wonderful Christmas present to the whole nation. Ruscha’s work has been much admired as it travelled the country in one of the ARTIST ROOMS exhibitions organised by Tate and National Galleries of Scotland using the collection donated by Anthony d’Offay. These works on paper will be a wonderful resource for future exhibitions here in the UK.’

Ed Ruscha was born in 1937 in Omaha, Nebraska. He came to prominence alongside emerging Pop artists in Los Angeles, where he moved in 1956 to study at the Chouinard Art Institute. He has represented the USA at the Venice Biennale in 1970, 1976 and 2005, and has been the subject of many international museum retrospectives, including at the San Francisco Museum of Modern Art (1983), Centre Georges Pompidou (1989), Hirshhorn Museum and Sculpture Garden (2000), Museo Nacional Centro de Arte Reina Sofia (2001) and Hayward Gallery (2009). Rusha was elected to the American Academy of Arts and Letters in 2001 and became an Honorary Royal Academician in 2004.

Tate’s collection holds seven paintings, twenty-three unique works on paper and 111 prints by Ed Ruscha, encompassing techniques ranging from photography to screenprinting, lithography, etching, aquatint and photogravure. The majority of these works are part of ARTIST ROOMS, a public collection of contemporary art assembled by Anthony d’Offay and jointly owned by Tate and the National Galleries of Scotland, which is used to stage regular exhibitions at venues across the UK.