As the fringe draws to an end Edinburgh’s mystical breeze dons his hat and boards the train to London. Tourists and entertainers seep back to their homes, whilst the remnants of; self-expression, beauty, energy, frivolity, filthy innocence and the down right absurd is littered onto the cobbled alleys, like a discarded dream.

1. Who goes to the festival?

Whilst I danced in the beauty of this international celebration of arts and culture, I was still bitterly aware of a point illustrated in a joke made by John Bishop (Comedian) in an ‘Ad Lib’ session, “I didn’t go to the type of school where your friends came back from the summer holidays and said that they’d spent their holidays in ‘The Edinbraaa Festival'.” The audience roared with laughter, because there is a definite ‘type’ of audience that the festival attracts. Sadly there is an undertone of snobbery and pretention that distorts the wonders of a festival that is famed for its comedic ability to poke fun at itself.

2. What can I do between events?

The experience of being in the city during the festival is electric. Being a student I recognize that to see lots of events you do need a suitable income (probably relating to my previous point). But… because of the energy that is brought to the city by the swarms of people and performers, you will no doubt find a way to spend an hour entertained for completely free. For example, walking ‘The Royal Mile’ (a task that would usually take you 10 minutes) will probably take you half an hour at least to wade your way through the different groups of street performers.

3. How expensive is the festival?

Free events, free by name, unless you have no heart. The free fringe I think is an integral part to the festival, because it gives a platform to performers who may not be able to afford a huge venue’s rental. But ‘free performances’ aren’t necessarily free. I don’t want to complain because most of the performers deserve a donation from the public for an hour of their work un-paid. But to warn you, if you attend a free event you will leave the building with an exhausted hopeful performer asking for a donation from you. I was caught at the beginning of the fringe by this concept coming to a free event with my empty purse and leaving with a deep guilt for not being able to pay the performer.

4. Should I book tickets in advance?

There is so much to see at the festival its difficult to know where to look first. The brilliant idea of ‘The Festival App’ has saved a lot of worry with the ability to check what’s on ‘Near by & now’. The amount of flyers you will get thrusted in front of you about many things you will have had no knowledge of prior to coming, I would keep a free diary. For tickets to events, especially comedy, I would not book in advance (unless you are desperate to see someone that you would miss out on a good deal) because I can assure you the box office will be covered by promoters shouting of 2-for-1 deals that cant be missed.

Highlights of the festival

1. ‘Undone’. A performance including one actor, a tin bath and a suitcase. The lone actor (Wessel Pretorius) takes you on a journey of self-evaluation, from his fragile childhood to today. He recounts the stories of the most influential characters in his life; is mother, his father, his brother, his driving instructor and himself. The actor’s ability to perform the numerous characters with such emotional intensity was simply incredible. Without a doubt the highlight of the performance was a scene in which he slowly danced, with every muscle of his body poised and perfect to the piercing sounds of opera, the audience wept to see this broken and vulnerable character dance away his insecurities. This was pure helpless artistic beauty laid before you asking to be loved.

2. Christina Rossetti’s ‘Goblin Market’, Performed by Liverpool University Drama Society. This drama society is award winning for a reason, the standard of acting from the handful of student performers was tremendous. The play was an adaptation of the poem by Christina Rossetti ‘Goblin Magic’, but you could be fooled into thinking that this was written for the stage from this elegant adaptation. The play toyed with Rosetti’s theme of temptation to the point of insanity; this was captured by the perverse dramatisation of insanity and desperation. The shameless display of tortured desperation by the main character, Laura, was utterly spell binding, you would find it hard to find fault in her portrayal. I must mention the performance of the actress who played an intermittent role as a previously seduced woman, her facial ability to convey insanity was scarily perfect.

3. ‘Hard Man’. Set in ‘The Wee Red Bar’, As you entered the bar you were transported into a debauched Glaswegian pub, the haunt of the criminal, poor and hardcore working class attitude. The characters mingled with the audience before the play began, directing you to available seats and serving you drinks from behind the bar. The characters all dressed in crude stereotypical clothes of a working class council estate and adorning the attitude to accompany it. I was accosted by one character as I sat down, who came within an inch of my face and asked “Who tha foook ya smiling at?!” When I replied with my suitable cocky welsh attitude “You, why?” he responded “Yoooor talkin shite yooo are” and planted his hands down his trousers. The play portrays the life of a man who grows up in post-industrialised Galsgow dealing with the challenges of living beneath the bread line. As you can guess the play uses Trainspotting-esque visceral scenes to portray the depravity of a life of poverty in Glasgow. The acting was very well portrayed hard hitting realism, I think everyone in the audience was actually scared of certain characters, especially as they were mingling amongst you in the break. The play was very involving and did a good job of putting you in the situation of being confronted by reality of why so many people are driven to crime. 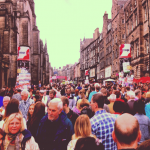 1. Omid Djalili, My personal favourite of the fringe. Omid’s comedy is known for poking fun at ‘racists’ and highlighting he absurdity of racism. As I sat down I quickly realised that by the demographics of the audience (and by the beautiful tones of Farsi) Omid has a huge Iranian following. Lots of jokes played upon this fact, with pro Iranian humour, which I enjoyed but I imagine is an acquired taste. The show was light-hearted comedy with a few political punches about the lack of representation for the BME community in comedy, or more generally, show business. Omid mentions during the show the wonderful work he does to combat racism, which I think is his main purpose as an Iranian comic. The mini Iranian dance interludes between each joke get everyone in an innocent party spirit. Omid omits a welcoming vibe toward the audience, in true Iranian spirit you immediately feel like a guest (Even if you have paid Â£15.)

2. Liam Williams, An up and coming young, self-deprecating, sarcastic, reflective comedian. The comedy took place in the crammed basement of Edinburgh’s notorious ‘The Tron’, known by students for having cheap pints and not being an utter dive. The audience was relatively young and were mostly half cut from having started drinking earlier in the bar upstairs, Williams started his set with a few obnoxious heckles from said group but they were quickly brushed aside. Williams did take a while to warm up the audience, but soon bolstered into his best jokes, where he (without giving his set away) read from a book he had re-written. This is where he came into his own, with a creative eloquence his whit punched out to the audience alike a poet.

1. Antonio Forcione group. Undoubtedly the best guitarist I have ever seen! A sensual blend of Latin, African and Jazz melodies that will instantly make you fall in love with this man. A performance set in a George Square lecture theatre, with about a third of the seats filled, I looked around the room and worried that this performance might have been a mistake, but my worries were soon smashed. As Antonio walks onto a yellow light stage he picks up his acoustic (with pic ups) and plays the audience into science. His introduction was enough to knock you off your feet, my friend and I slowly turned to look at each other both as flabbergasted as the other, how could a man make this much beauty with one guitar?! Then his other three band members creep onto the stage to arouse us even more, one a South American percussionist, another a South American Bass player and the other an African Cello player. The percussionist almost outdid the talent of Antonio himself with is ability to pick up almost anything he found on stage and create a sexy yet punchy rhythm. The performance ended to the whole audience in a standing ovation and cheering for more (after the en-core that is), I ended up pitying the people outside drinking and not experiencing the magic of what I had just seen.

The cultural impact of television soaps