In Jac Husebo’s play, Newton Bassett is the titular coastal town that they forgot to close down, as Morrissey put it. Neglected by government and ignored by tourists, the town’s residents trudge on in mundane jobs, longing for a return to the comparative prosperity that they knew formerly.

Cue the money men. Focusing their pitch at Joe, the well-intentioned and overwhelmed new proprietor of Webber’s, the town’s supermarket hub, three ‘pin stipe boys’ (one of whom is female) descend on Newton Bassett offering an opportunity to achieve the very thing its population most craves. With conditions, naturally, and ones that have a direct impact on his personal and professional relationships.

The complexities of such a pact are handled with subtlety in a script that rejects neat conclusions, although the casting of actors in multiple roles on both sides of the equation occasionally points to parallels that are rather more pronounced than they could be. The sparse staging is peppered with some lovely touches (the slow-motion conclusion to Joe’s big night out is a particular delight) and the young(ish) cast bring a certain lightness to a script that may otherwise be leaden with the weight of what remains unsaid.

A Modern Town is a nod to the social drama of the pre-Blair years, with a very Blairite conundrum at its core. Local Hero for the PFI generation, if you will – although with an almost total absence of heroism. Genuinely engaging. 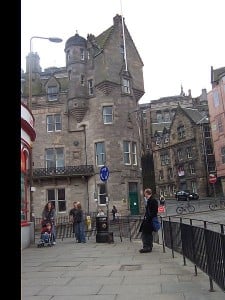