Edinburgh Fringe Festival – Andrew Lawrence Is Coming To Get You

'Mellower' is a word commonly ascribed to Andrew Lawrence's performances over the past year, but this is not to be taken as an indication that he has gone soft.Â  Firmly on curmudgeonly form, Lawrence's latest Fringe outing is crisp and uncompromising, taking to extremes his unique gift for self-deprecation.

Deflated at being labelled 'up and coming' after nine years in comedy, Lawrence commonly directs his frustrations inwardly from his unfitness for television to a perceived inability to carry off a suit (he looks very smart, as it happens).Â  Not that he is now beyond throwing the odd devastating put down in the name of alienating an audience: 'Nice, isn't it, Edinburgh? I could live here. Fortunately, I can afford London.'

Lawrence is also on the front foot on the subject of timekeeping, perhaps in reference to last year's reviews, where the main gripe was that the show ran some way short of its billed hour, which leads him into the first of three trademark sing-song diatribes.Â  It's a peculiar talent to be able to deliver dense invective to the tune of The Bells of St Clements and one that you imagine provokes derision or envy (probably both) in his peers.Â  Whatever the case, it is hugely effective.

While Lawrence continues to be something of an acquired taste, his presence at one of the Fringe's larger venues (almost full tonight) suggests that audiences have finally adjusted to his style.Â  He sails pretty close to the wind with some topical material, which would likely have sunk a less assured performer, but no comedian has ever achieved greatness without taking a few risks and Lawrence is not far off that tonight.

A major talent. Just don't call him up and coming. 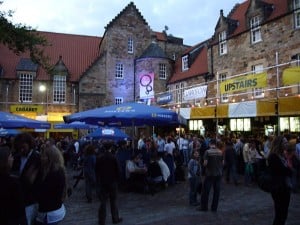