There are few things more difficult to pull off at the Fringe than the one man sketch show. A few ill-judged, samey characters or some interminable costume transitions and an hour can begin to feel like a week in prison. Fortunately, Ed Eales-White seems well aware of the potential pitfalls.

Featuring enough quotable and developed characters to hold the attention, Champions is a study in bathos. There’s the shouty gym instructor who appears to be made of porcelain, pub everyman Kenny and afflicted poet Colin, who happens to be a pigeon. Best of all, there is Lee Guinness, a postal worker with an over-developed need for acceptance who is one part bedsit lothario to three-parts extra from The Only Way Is Essex. Lee is a fine comic creation and deserves a wider audience.

As ever in this kind of show, not everything works – Graham, the service station shopkeeper, has ‘filler’ writ large upon him and the recurring figure of a jealous husband is decidedly hit and miss.

However, for the most part Champions is terrific entertainment, Eales-White finding willing audience members to bolster the cast and ending the show in as neat and as inventive a fashion as you could hope for in this genre. Very promising. 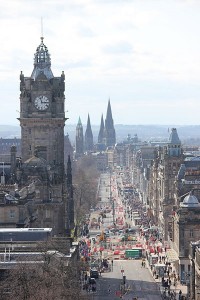 Image by Julian Nitzsche (Own work (own photograph)) [CC-BY-SA-3.0 (http://creativecommons.org/licenses/by-sa/3.0)], via Wikimedia Commons