While we watch the bloody events unfold in Egypt hoping that somehow the people can find a quick peaceful solution that brings stability back to their lives, others much closer to the cauldron watch events nervously.

The outcome of this internal struggle could have profound effects on the stability of not just the region but of the whole world, as the 'wrong' outcome here could do great damage to the Arab-Israeli peace process.

As Leslie Susser points out in an excellent article in JTA Egypt has the most powerful military machine amongst the Arab world, with 650,000 troops, 600 combat aircraft and 3,500 tanks. All US supplied and trained. But with Egypt under Mubarak a sort of 'cold peace' was maintained so that Israel could effectively factor that threat out. As Shimon Peres said "Not everything Mubarak did was right. But he did one thing for which we all owe him a debt of gratitude. He kept the peace in the Middle East."

He goes on to say that a sudden change to a more hostile regime in Cairo would mean that Israel would have to quickly change its whole defence strategy, possibly at a massive cost.

There would also be the very real danger of a continuation of the domino effect that started very recently in Tunisia and has already seen King Abdullah of Jordan replace the country's prime minister and the Yemeni President Ali Abdullah Saleh announcing that he will not be seeking re-election when his term expires in 2013. The end result of which could be a whole string of more hostile governments surrounding the nuclear armed Israel.

Then of course there is Iran always in the background.

What seems to have surprised and probably worried the Israelis is the rapidity with which the US under Obama has walked away from the Mubarak regime. Other regimes may now worry about finding themselves bereft of US support should they end up in the same situation as Mubarak. 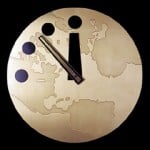 For the Israelis the preferred outcome would be that the very recently appointed vice president Omar Suleiman takes over and maintains the foreign policy status quo but with greater democracy within Egypt. Suleiman has already called for order asking " … all citizens to respond to our armed forces's call to return to your homes and respect the curfew, to supportÂ  the state's efforts to restore calm and stability. …. Those taking part in these protests have delivered their message".

Leslie Susser finishes his piece with 'Either way, the events in Egypt are not good news for those advocating Israeli-Arab peacemaking. They could push efforts to resolve the conflict back several decades'. Let's hope he's wrong. Otherwise the directors of the Bulletin of the Atomic Scientists may be looking at adjusting the Doomsday Clock again.

Fed prepares to normalise, but sooner than expected

England Crash Out in 2nd Round of Oxfam's Inequality World Cup