As all politicians say when they are running behind in them, you shouldn't believe what the polls are saying. But the latest ComRes and YouGov polls both put the Labour party in a commanding lead over both coalition parties.

The latest Comres survey for the Independent puts Labour on 42%, which is 3% higher than the last one just 3 weeks ago. The Conservatives follow on 34% (3% down) and the LibDems are 1% up on 12%.

The picture from the YouGov poll is slightly better for the Tories but dire for their coalition partners. Labour once again leads with 43%, Conservative on 40% and the LibDems on a lowly 8%.

It seems that the electorate either have short memories or maybe think that the cuts and tax rises are good … for other people. It's not long since the coalition were voted in to sort the economy out. 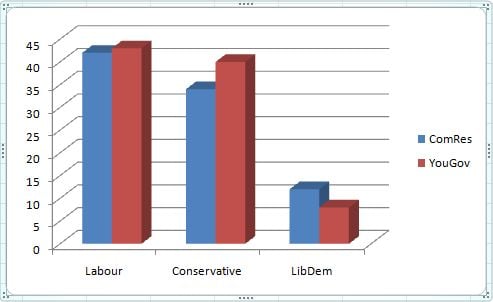 The ComRes poll indicates the unhappiness with the coalition as 58% disagreed with the premise that the UK is better off with the present government.

Overall the coalition's honeymoon is now over (if they ever really had one).

Both parties in the coalition are hamstrung to some degree by the requirements to placate the members of the other party. So those that support either the Conservatives or LibDems may be judging the coalition in these polls somewhat on its inability to follow what they see as the preferred agenda. That can only benefit Labour.

Whatever the reason the shortcomings of Labour over the previous 13 years of government seem to have been forgotten or ignored.