Many see the statues as a symbol of how northern Europe 'looted' Greek wealth in the past, and protestors claim that the enormous international pressure being placed on Greece to institute austerity, privatisation and deregulation represents a similar looting today.

Campaigners argue that the 'bailouts' actually benefited the European banks, who created the debt crisis, rather than ordinary Greeks. 92% of the bailout funds to Greece [3] went to French and German banks, research from Jubilee has shown. 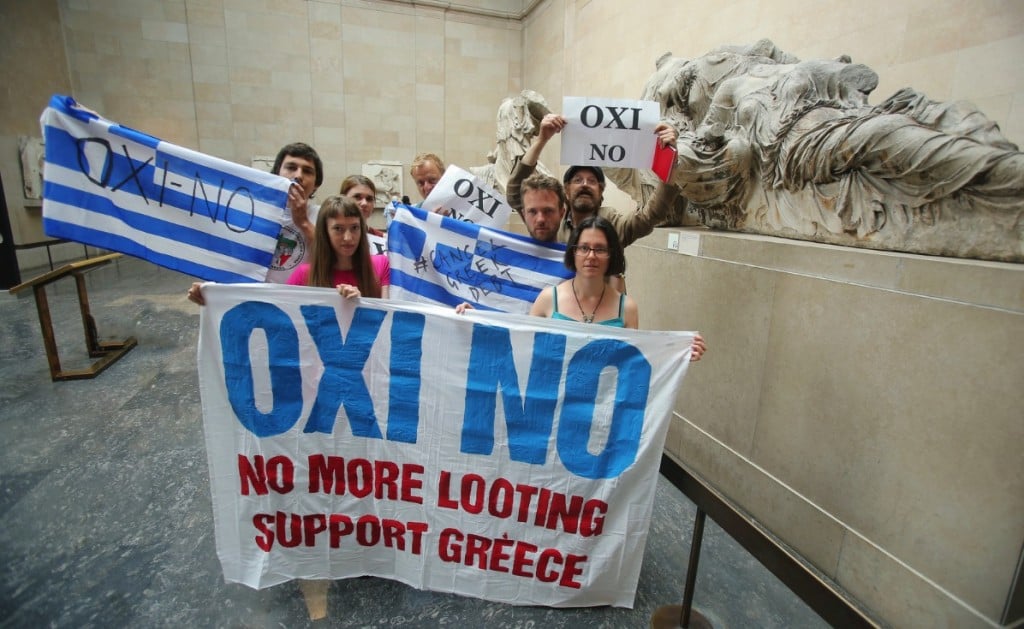 Jonathan Stevenson from the Jubilee Debt Campaign who was part of the protest said:

"The Parthenon Marbles are an international symbol of the looting of Greece. We're here to say OXI to the modern-day looting of Greece through forced austerity and privatisation to pay off the reckless loans of European banks. Just as with the statues, the looters have primarily served their own interests while claiming to be helping Greece. In the coming days people across Europe are standing with Greeks to say no to financial blackmail, and no to austerity and fear."

Nick Dearden, the director of Global Justice now who was at the British Museum said:

"The Troika's brutal drive to destabilise the Greek government shows all the signs of the explorers of the British Empire who took these statues. Greece's crisis was caused by corrupt elites, reckless lenders and European politicians who allowed the banks to do what they like regardless of the consequences for society. If the people of Greece say OXI this weekend, we need to stand in solidarity with them against the bully boys of international finance and against the devastation that the politics of austerity is having across the world. This vote affects the whole world."

The May Day anti-cuts protest