One half of the absurdly Welsh character comedy The Committee Meeting, Speaking As A Mother sees him return to the day job (evening job, whatever) and finds him in impish, energetic form. A noted weaver of tales that invariably end in some form of discomfort for their narrator, James also has a nice line in mischievous asides: 'I wish I could do observational comedy,' begins one story, 'I'd like to buy a house.'

His easy, undulating style is ideal for set ups like this and he takes full advantage of the cadences of his accent – when he is using it, that is. Displaying a good ear for regional twangs, he slips comfortably into Glaswegian, Mancunian and Essex accents during his set, adding colour and authenticity to already entertaining material.

James devotes a significant portion of the hour airing concerns regarding his inability to develop into adulthood. On this evidence, he needn't worry. Speaking As A Mother is a more mature, more rounded set than his show at last year's Fringe and makes far better use of call-backs. He even ends on a song, like those proper, grown up comedians used to, when such a thing existed.

James is having what looks like a career-making festival and possesses the versatility and likeability to make the transition from jobbing stand-up to . . . well, to whatever he pleases, actually. See him live now or see him on the television later. The choice is yours. 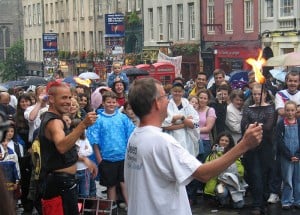