Not many people retire to the place they originate from, but that is precisely what Margaret Johnston did when she left Scotland for her new home in the Canadian province of Nova Scotia, or 'New Scotland'.

When Margaret lost her husband in 2009, soon after taking early retirement, she decided it was time to move back to her place of birth, namely a town called Shelburne in Nova Scotia.

“I was born in Nova Scotia in 1948,” explained Margaret, who worked as a pharmacist. “My Scottish mother was a war bride and married a Canadian serviceman, settling with him in his hometown of Shelburne. When my father died in 1954, mum and I returned to Glasgow and it wasn't until 1982 that I made my first of many return visits back to Canada.” 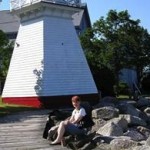 She began her research for purchasing a home in Canada, signing up to the Canada Buying Guide online information resource. “I found sound advice and the trusted suppliers I needed for moving such a long distance, such as a reputable removal firm and currency exchange specialists, who I used to transfer £200,000 to my Canadian bank account from Scotland,” said Margaret.

In October 2013, Margaret made her final move back to Shelburne, where she has bought a traditional detached home for CAD$179,000 (approximately £98,000).

Margaret's 60-year-old heritage home in Shelburne has one large en-suite bedroom, three further bedrooms and a family bathroom. Downstairs are two reception rooms, a dining room and large kitchen. It's in a quiet road near the centre of town, set off the road with lots of green space. Margaret is considering offering bed and breakfast.

Said Margaret: “Nova Scotian house prices, outside the capital Halifax and its metropolis, are very favourable and slightly less expensive than an equivalent UK suburban home. Generally, homes here are larger and come with more land than in the UK.”

While Margaret was able to move to Canada freely thanks to her Canadian citizenship, she advises British people considering a move there to prioritise getting their visa and researching employment opportunities. “If you are below retirement age and expecting to earn income for any number of years in Canada, research the rules of employment, your tax situation and pension provision,” she advised.

“And ascertain the details of any UK pension contributions already gathering in your UK pot. There is provision for state healthcare in Canada but it is basic medical, as well as hospital care. Prescriptions and some other things require contributions, which I believe can vary between provinces.”

Stewart Buchanan, author of the Canada Buying Guide, concludes: “The Canadian Government, through Citizenship and Immigration Canada (CIC), sees immigration as vital for increasing the country's population, as well as growing its skill base. Among the various visas offered by CIC, one of the most popular with expats is the Federal Skilled Worker Program. However, check the CIC website to see when applications for specific visa types are being accepted and whether there are any caps that would affect you. Employing a suitably qualified migration agents can be a great help for some people.”