With all the Brexit problems besieging Theresa May’s government, they did get a fillip from the Office for National Statistics (ONS) today in the form of continued good news on employment.

8.83 million people were economically inactive giving a s=rate of 21.5 percent, which is the lowest since comparable records began in 1971. 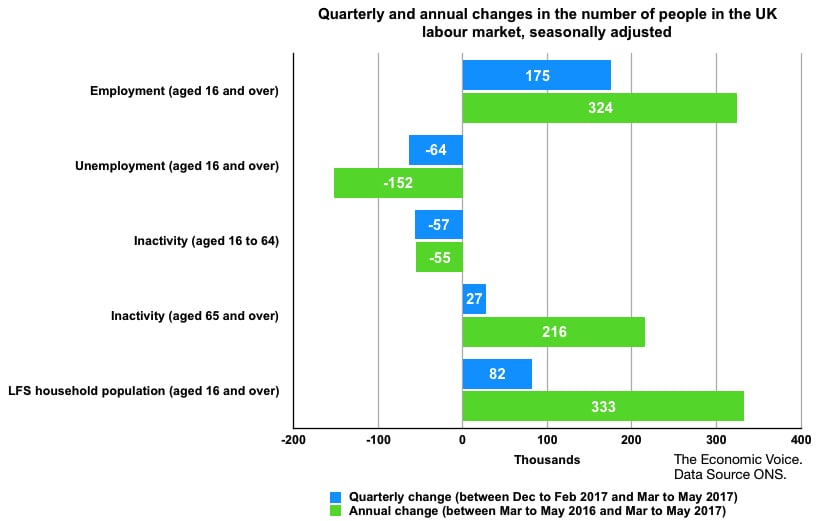 "Families across the country are struggling as prices rise and real wages continue to fall.

"The government must take note and rethink its extreme approach to Brexit.

"Nobody voted to make themselves poorer, but it is the public that will pay the price if the UK is dragged out of the single market and customs union.

"If Theresa May is serious about helping just about managing families, she will agree to soften her approach to Brexit and put people's jobs and living standards first."

“These figures underline the strength of the UK’s flexible labour market, which was recognised in yesterday’s Taylor Review. But declining real pay and productivity remain concerning, reinforcing the imperative that any changes following the review support the economy’s ability to create great jobs.

“Making real progress on productivity growth requires a modern industrial strategy, with real change on the ground on skills, infrastructure and innovation.”

“The government must not use headline unemployment figures as a convenient camouflage to hide the fact that our economy is fundamentally failing.

"Today's figures show that both actual hours worked and average weekly earnings fell. The economy is not meeting the needs of the very people it should be serving.

"More and more workers are being trapped in precarious informal employment or part-time work.

"Yesterday's Taylor report did not propose the bold ideas we need. We need to go back to basics and ask who the economy is really for.

"What good are low unemployment figures if your income isn’t enough to build a life upon? What good is it being forced to take up a job that gives you no security, no stability, and no sense of satisfaction?

"We need to make the economy work for everyone. That means a decent living wage, ensuring everyone is paid a basic income, providing a footing from which to pursue a career that is rewarding and inspiring. It means transitioning and rebalancing our hollowed out economy to invest in the jobs we need for a resilient and secure future, such as in the renewables sector. And it means exploring ideas such as a four-day working week.”