Employments Statistics Look Good But Wages Are Lagging Behind

The latest employment data from the Office for National Statistics for May to July 2017, shows that while employment continues to rise, real wages are falling behind.

July's labour market figures show there were 32.14 million people in work in may to July, which was 181,000 more than for February to April and 379,000 more than the same period last year.

The employment rate of 16-64 year-olds of 75.3 percent is also the highest since comparable records began in 1971.

At 4.3 percent the unemployment rate is the lowest comparable records started in 1971.

The number of economically inactive people also fell to 8.74 million with an economic inactivity rate of 21.2 percent, which was once again the lowest since comparable records began in 1971.

The downside to the story is that, although wages, including and exclusions bonuses, rose by 2.1 percent, when inflation is factored in they fell in real terms by 0.4 percent compared to a year ago. 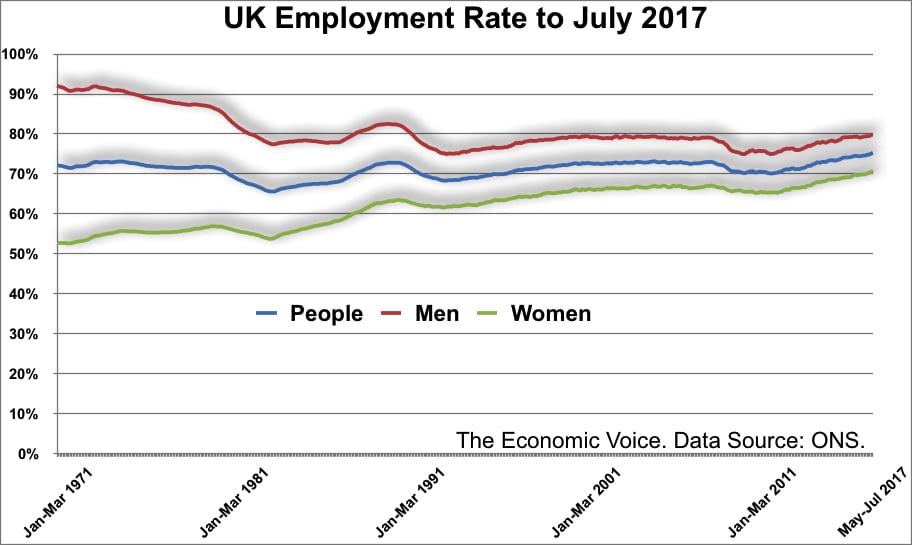 "Under this Conservative Government there are more people in work than ever before.

"Since 2010, over 3 million more people now have the security of a regular pay packet and more young people are gaining the experience they need to help them get on in life.

"Labour would put all this at risk. Only the Conservatives are building a strong economy that works for everyone."

"Over 7 million people from working families are living in poverty, more than ever before.

"We welcome the overall increase in employment, but are deeply concerned that millions are still unable to make ends meet as the cost of basic essentials spirals while real pay falls.

"Too many still find it more difficult to get a job because of their age, ethnicity, disability or where they live. And these same groups bear the brunt of this Government's failed austerity plans.

"A Labour government will implement a real Living Wage of £10 per hour, and put an end to Tory austerity."

"Today's labour market data showed the now familiar combination of a seemingly tight labour market alongside still subdued earnings growth. Employment growth for the three months to July was buoyant, while the unemployment rate fell to a 42-year low of 4.3%. However, markets were more interested in annual earnings growth, which was surprisingly unchanged at 2.1% both including and excluding bonuses. That is well below the current rate of inflation.

"The data leaves Bank of England interest rate setters with a dilemma going into tomorrow's latest policy announcement. With headline inflation well above its target but domestic inflationary pressures seemingly still under control, most MPC members will probably content themselves for now with sounding some notes of caution rather than hiking interest rates."

"The squeeze on living standards is not letting up. This is the fifth month in a row that pay has failed to keep up with inflation.

"Ministers need to stop twiddling their thumbs and get wages rising across the economy. Just one in nine UK workers had a real-terms pay rise last year.

"Yesterday's derisory offer to prison and police officers must not be a sign of things to come. The government needs to offer nurses, firefighters and all public servants increases that at least match the cost of living."

"The UK economy remains a great job creating machine with the employment rate rising to yet another record high of 75.3% in the three months to July.

"The unemployment rate also fell again to just 4.3%. This is some way below the levels seen before the financial crisis and slightly below the Bank of England's latest 4.5% estimate of the equilibrium rate of unemployment at which labour shortages might start to push up wage inflation.

"So far, however, there is little sign of this, with earnings growth remaining unchanged from last month at 2.1%, well below the latest inflation reading of 2.9%. So real wages continue to be squeezed, which corresponds to relatively weak productivity growth as strong jobs growth contrasts with modest GDP growth so far this year.

"This could start to change as the public pay cap is gradually eased for some workers and as labour shortages do eventually cause private sector wages to edge up. But this seems unlikely to push real wage growth back into positive territory until later next year at the earliest when the effects of the weak pound on inflation may begin to fade."

"The UK labour market continues to show robust improvement, despite lacklustre economic activity. This provides some much-needed good news for consumers as they continue to face a serious squeeze on purchasing power.