The company recently acquired a number of consented wind farms , including the 12 turbine wind farms at Long Mountain, Antrim and Clondermot, Londonderry. When fully operational the new wind farms will generate over 53MWs of renewable electricity. This is enough energy to power 33,000 homes.

Energia Renewables is also in the final stages of construction of its Hollyford wind farm in Tipperary, where all its turbines are now erected and will start exporting power shortly. Having cost €18m to develop, this farm's three wind turbines will generate 9MWs of power. Energia's total investment in Hollyford and the recently acquired windfarms will be excess of €100m.

Energia's Operational Windfarm Portfolio, which combines power from Energia's windfarms and power from third party windfarms contracted to Energia under power purchase agreements, will now be supplying over 600MWs of green power. This portfolio will be increased by a further 300 MWs of 'green' power by a number of wind farm facilities that are currently in development.

Peter Baillie, Managing Director, Energia Renewables said: "We are delighted Energia is now supplying over 600MWs of renewable energy. This 'green' energy will help to power businesses across Ireland. We are on track to supply over 1,000MWs by the middle of this decade. Energia Group remains one of the most significant contributors to the achievement of Ireland's renewable targets and one of the largest investors in the renewable sector. 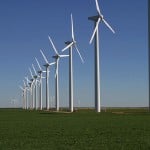 "To date Energia Renewables has invested over €200 million in developing renewable sources of energy including our portfolio of Irish wind farms. This is one of the reasons last year's report on fuel-mix and CO2 emissions for individual electricity suppliers named Energia as the Greenest Energy Supplier on the island of Ireland, among the leading larger suppliers.

"On all of these projects we've received a lot of support from the local communities and we're very grateful for this. The development of our new wind farms is a very positive step forward for renewable energy in Ireland and this is something that is very important to us. All of our wind farm developments bring significant benefits to the local economies, including job creation, increased rates for the local authorities and improvements to local infrastructure such as roads."