Former England flanker, Alphonsi is one of the biggest names in English Women's rugby. A pivotal member of the Women's Rugby World Cup 2014 winning England side and earned 70 caps during her international career. Although, Alphonsi also understands the value of grassroots rugby in nurturing the next generation of women's rugby players, and visited Halifax RFC to pass on some of her experience and advice.

During her visit to Halifax RUFC, Alphonsi spoke about the current health of English rugby, both at grassroots and elite level. Alphonsi also spoke about the positive impact Rio 2016 will have on rugby, helping to continue the development of Women's rugby.

Halifax RUFC shot to fame when they featured in Land Rover's Rugby World Cup 2015 campaign, 'We Deal In Real' which aims to focus on grassroots rugby and champion the heart and soul of the game. Halifax RUFC were recognised as a perfect example of this in the UK.

After taking the Halifax RUFC Women's team through a gruelling training session, Alphonsi commented: "Grassroots rugby is where it all starts for every rugby player, and being able to come and join in a training session with the Halifax team and hopefully pass on some of my experience has been a pleasure.

I have been fortunate enough to enjoy success with the England Women's team but that would have been impossible without teams like Halifax growing the sport and specifically the Women's aspect of rugby. It is great that Land Rover is ensuring people pay attention to grassroots rugby, not just the superstars of the sport during Rugby World Cup 2015."

Given its 20 year heritage in Rugby around the world from grassroots to elite, Land Rover is using its position as a proud Worldwide Partner of Rugby World Cup 2015 to shine a spotlight on grassroots rugby. Land Rover's #WeDealInReal campaign champions and celebrates the people that are the heart and soul of the game, by putting local clubs on the global stage. 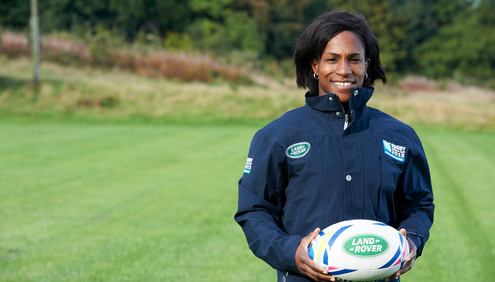 Back to school: 11 fascinating kid's dental health facts you really need to know