His name may have been lost in the mists of time but back in Victorian days the people of this land were terrified of him and fearfully watched the rooftops for him.

English folklore is full ofÂ  mythical creatures and demons and there will always be urban legends but is there any truth behind these characters? Or do we need to just take someone's gentlemanly word for their existence.

I favour the latter.

Why should we remove the magic from the 19th century reports of this demonic figure whom I personally would love to hear a reported sighting of in this age of rational reductionism.

First sighted in London in 1837 (The year Queen Victoria came to reign) his legend and sightings spanned the length and breadth of the country and was renowned for his ability to jump very high in the air and being generally quite scary.

His physical descriptions vary from sighting to sighting but mostÂ  are consistent in as much as this man was other worldly.

A 21st century perspective would suggest that these reports and sightings were the work of aÂ  man indulging in some prototype version of Free Running that the young scallywags of today practice, Â  jumping all over the cities with great athletic ability and throwing their exploits up on You Tube for their friends to watch. I find this highly commendable on the part of our youngsters, good on them.

Free Running is competitive, athletic and fun, plus it gets them from rotting in front of the Playstation 3. OK its dangerous but so is not exercising, anyway back to the plot and a little less of the rational denigration of this dark and mysterious character.

Spring Heeled Jack was described as having quite grotesque features and some descriptions place him well and truly in the category of "I wouldn't want to bump into him in the dark even with a gun".

Witnesses say that he was mostly a prankster and committed no murder but he did do a bit of groping of damsels making him a sexual predatorÂ  who liked a bit of jumping around. But was he human?

The reports of glowing eyes, pointed nose and pointed ears all add weight to the argument that he was of demonic origin and I will not question the sightings because there are many things under under heaven and earth that I do not understand (like Cricket) and go beyond my understanding of the grand scheme of things. 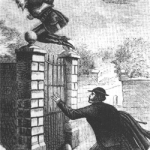 We wonder where our modern day caped villains andÂ  super heroes come from. Well its probably from characters like Spring Heeled Jack and the imaginations of 19th century writers and their animators who's etchings look almost as haunting today as they did back then.

If it were not for our de-sensitised 21st century minds which have grown used to the most explicit of horrors, the story of Spring Heeled Jack and others like his might once again frighten the people of this land and the drawings of him leaping from behind gravestones and across roofs would keep children awake at night gazing at those rooftops.

But if you are well read on the stories of Spring Heeled Jack when there is a power cut, you may have the opportunity to scare your companions and loved ones with a few tales from the 19th century whilst pointing out of the window at the chimney of your neighbour's house.

Remember myth and legends are usually based on some aspect of historical fact, so how much of this legend is true?