Enhanced annuity sales down 29% after 2014 Budget

UK enhanced annuity sales fell to £600 million in the second quarter of 2014 according to research by Towers Watson. This represents a decrease of 29% from the first quarter figure of £847 million and a 34% fall from the same quarter last year, and follows the proposals announced in the Budget which are set to revolutionise flexibility in pensions decumulation.

Average case sizes recovered to around £50,000 in the second quarter, which is close to the highs witnessed throughout 2012, after having fallen to around £47,000 throughout 2013.  The number of new cases in the most recent quarter fell to levels not seen since early in 2010 and, at around 12,000 cases, is some 40% below the average quarterly figure seen in 2013.

Evelyn Gutteridge, a consultant at Towers Watson said: “The proposals set out in the Budget are set to greatly increase the flexibility open to consumers and are likely to increase the appeal of alternatives to annuities.  It is therefore not surprising that enhanced annuity sales are experiencing declining volumes. For many consumers, annuities will continue to play an important role in offering a straightforward way of drawing retirement income in a way that insures against the risk of outliving their savings. We therefore anticipate that annuities will continue to be an important part of the retirement landscape, albeit at a lower level.”

It is, however, still too soon after the Budget changes to be sure of the longer term impact on enhanced annuity volumes as product providers, advisers and consumers respond to the new flexibility available to them.  Evelyn Gutteridge noted: “We expect to see significant innovation across the pensions decumulation market as providers respond to the opportunities offered by the Budget changes in this large and rapidly growing market.” 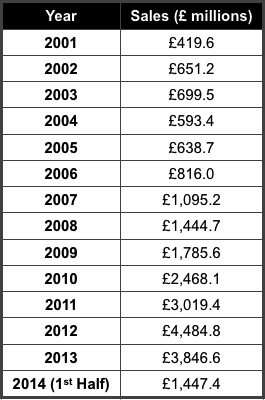 Oil prices are set to rebound