Over the past week, Olympic fever has gripped the nation. After a relatively slow start, the medals have started tumbling in and Team GB is on course to achieve its best-ever tally of the modern era. The transport system has just about worked, due in large part to normal commuters staying away. After an abysmal start, even West End businesses are now seeing trade returning to something like normal. And the sun has even come out, in patches. It’s not a bad time to be a Brit.

We should enjoy this while it lasts. For all of the pride and feel-good factor that the games bring, they are ultimately a distraction from the dire economic situation that we are in, not a solution. The much-hyped economic boost from the games will be small – even the Bank of England’s modest assessment of a 0.2 percentage point (ppt) spur to quarterly growth looks a bit optimistic given the collapses in central London trading last week. The Games will not solve the problem of crumbling infrastructure outside of Stratford, or the large queue of people looking for a job. And those who have splashed out on last-minute tickets may feel the need to batten down the hatches again in order to pay for it all.

Meanwhile, other news in the past week has hardly been positive. ECB President Draghi seemed to backtrack quite a bit on his recent comments to do ‘whatever it takes’ – by definition, conditional support programmes definitely do not fit this description. The latest survey data suggest UK activity has weakened at the start of Q3, not jumped. And the growing rows in the Coalition have already led to stalemate on different reforms that are important to each of the governing parties. The economic clouds have darkened, not dispersed. When everyone gets back after their summer holidays, market speculation about Europe’s economic prospects is likely to intensify.

To be fair, the Olympics should never have been thought of as economic salvation. Despite host politicians repeatedly arguing that the Games bring tangible economic benefits, independent academic research nearly always concludes that the overall costs may outweigh the benefits, relative to other options (imagine if we had spent Â£9bn on youth unemployment schemes). Politicians like to talk up the benefits because they think they need to justify the games in terms of money spent and brought in. As with so many other things, they get this wrong. The Games are great not because they generate growth or provide a higher return on public investment than any other spending: the Games are great because they bring people and communities together to celebrate their shared identity and pride. Walking around the Olympic Park at the weekend, the feel-good factor was almost tangible – and I genuinely didn’t mind that my tickets had cost a bomb.

Perhaps, in fact, that is one of the real takeaways of the games: there is more to life than GDP, or other economic data. Unfortunately, for the 2.6 million people looking for work, or the extra 2 million that were forced to take a role they didn’t want because there were no real jobs out there, the reality of the struggle in today’s economy has never gone away. The rest of us will probably have to come back down to earth with a bump soon. For all the pride we can and should take in our dedicated athletes, someone else’s gold medal is not going to put bread on the table. 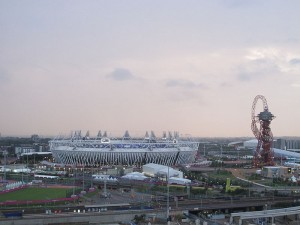 Is the UK Population the New Bubble?