Despite the Spanish Prime Minister’s best efforts to portray the bail out of his country’s banks as a victory, this latest propping up just shows that the problems are spreading.

Marano Rajoy, Spain’s Prime Minister, hailed the Â£80 billion (â‚¬100 billion) bail-out move as a triumph for the Euro saying the ‘credibility of the Euro won’. And the Spanish newspaper El Mundo called it a ‘bailout without humiliation’.

But the details of the bail-out are not yet clear and there don’t seem to have been any hard conditions placed on Spain as part of the deal. Some might argue that it was the banks that were bailed out, not the country so austerity conditions would not apply in this case. One wonders though how the Greeks will view this as they re-enter the polling booths. Then there’s Ireland and Portugal of course.

Many people are also in doubt as to whether the Â£80 billion will really be enough to save Spain.

The pouring of more money into the Spanish banks will change little other than buy a little time and perhaps protect Spain from a Greek exit of the Euro.

The move has drawn some scathing criticism. Joseph Stigitz says that it will lead to a position where the Spanish Government and its banks will just be propping each other up. And Nigel Farage called it ‘…utter madness; it is the reinforcement of failure’.

But the real question is about the politics. Will the Eurozone countries get together in a full union and spread the risk and reward amongst themselves so that the Euro can become a currency with proper backing?

Without this the crisis will continue and can only get worse. 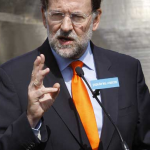 Full political union within the Eurozone is the only way to preserve the current global economic system. But the peoples of those countries might not like that particular proposal even if their politicians (and the politicians of the rest of the world) do.

Should the Eurozone crash badly then the rest of the world’s economies will follow suit just as surely as a line of dominoes falls.

The people of the Eurozone will at some stage have to decide (or more likely be told) whether they want full political union to maintain any semblance of their current way of life or if they all, or some of them, want to collapse back into full independent nation status. I say collapse because that for many of them will be the case however temporary. Even the strong countries such as Germany will feel the pain.

What do the people want? To be part of a huge EU superstate? Or to stand on their own feet and take charge of their own futures.