On the eve of inter-governmental meetings in Brussels and Geneva in June and July to debate the fate of elephants, a group of conservation organisations requests all EU governments to urgently halt all commerce in ivory and to destroy all remaining stockpiles. New data shows escalating exports of ivory from the European Union to China and worldwide. The organisations warn that any legal loophole in ivory trade creates the opportunity to launder poached ivory into "legal" trade and thus fuels the killing of elephants.

"Weak European laws on ivory trading are a clear and present danger to Africa's elephants, and a gift to poachers and smugglers who feed almost limitless demand for ivory in East Asia", says Daniela Freyer of Pro Wildlife.

Mary Rice, of the Environmental Investigation Agency (EIA), added: "We are calling on EU countries to halt all ivory trade within, to and from the EU and  strengthen enforcement. This includes measures to destroy their stockpiled ivory – both carvings and raw tusks – irrespective of its source and alleged age. We will only be able to end the elephant poaching crisis when the trade fuelling it is banned and demand curbed."

Increased Exports of Ivory from Europe

Although the EU prides itself on supporting elephant conservation, recent figures show that the ivory trade is alive – and expanding. In 2012, ivory was second among smuggled wildlife goods in the EU and accounted for 14 per cent of all wildlife seizures. But there is also a burgeoning export of allegedly legal ivory, supplied with EU documents certifying it as ivory acquired before trade rules of the Convention on International Trade in Endangered Species (CITES) applied – so-called "pre-Convention ivory".

New figures prepared by Pro Wildlife from CITES data reveal the EU as the biggest exporter of such ivory, which is feeding the escalating demand. More than 20,000 carvings and 564 tusks were exported with official EU documents during the period 2003 and 2012, with the UK being the major exporter of carvings and France the major exporter of tusks, followed by Italy, Austria and Germany; 56 per cent of the tusks and almost 25 per cent of the carvings were exported to China and Hong Kong, the main markets for legal as well as illegal ivory. A comparison of import and export figures found import figures from China are much lower and do not match the EU export figures, casting grave doubt on the country's controls over the ivory trade.

Why all ivory trade has to stop

Sally Case, of the UK-based David Shepherd Wildlife Foundation, says "Clearly, the legal and illegal ivory trade go hand in hand. Fresh  ivory carvings are virtually indistinguishable from "antique" ones, thus making it easy to launder poached ivory into the "legal" trade with the help of legal loopholes. We are shocked that the UK turns out to be the biggest exporter of ivory carvings from Europe. This trade has to stop".

It is unclear how EU authorities can ensure the veracity of the documents they issue for "old" ivory. Moreover, traders in importing countries could re-use such documents to launder freshly poached ivory into trade.

"The US, as a major exporter and importer of ivory traded under the "pre-convention" loophole, has announced new rules to halt this trade and destroyed its seized ivory. It is high time for the EU to show leadership," say DJ Schubert (Animal Welfare Institute)

"All markets with high ivory flows need to be closed down to end the killing of tens of thousands of elephants each year – -and the EU should lead by example," adds Andrea Crosta (Elephant Action League).

"Despite being one of the three countries in Europe  which have destroyed seized ivory stockpiles in recent months, France is a hub of trade in tusks", states Charlotte Nithart of Robin des Bois. The French CITES authorities have provided certificates for the sale of 1.4 tonnes of "pre-Convention" ivory at two large auctions in March and May 2014 . The ivory achieved record prices of up to €1000  per kilo. Buyers included Chinese citizens, which directly conflicts with assurances given to the EU that China did not accept imports of raw pre-Convention ivory . At the same time, evidence accepted by the EU's own regulatory wildlife trade committee shows that forgeries of French CITES certificates were confirmed to be in circulation.

Other EU countries are also seeing a revival of the ivory trade. European companies based in Germany and The Netherlands openly advertise services to buy and sell so-called pre-Convention ivory "with legal permits", with China a major importer. A Danish auctioning company was fined for having illegally put elephant tusks up for sale in January 2014. 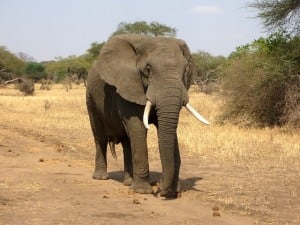 In addition, there is an extensive individual trade in ivory in the EU via the internet. During a survey period of two weeks in 2013, a joint INTERPOL/IFAW investigation found 660 advertisements for ivory on 61 auction sites, accounting for 4,500kg (4.5 tonnes) of ivory valued at about €1.45 million. Most of the ivory was destined for East Asia. The report noted that only  one EU country – the Czech Republic – has implemented national legislation on e-commerce for CITES protected species. Conservationists are demanding that the other EU countries agree to take similar measures when their wildlife trade officials meet in Brussels on 11 June.

However, recent data on ivory trade and elephant poaching show that the opposite has happened: African elephants are now being slaughtered for ivory on a scale that hasn't been seen since the 1980s. More than 44 tonnes of ivory was seized by enforcement authorities worldwide in 2013 – the highest figure for 25 years. Up to 50,000 elephants are killed by poachers each year and populations in several regions are collapsing. Local and even global extinction of African elephants is facing us now, as a consequence of human demand for ivory. China is today the world's biggest consumer of legal as well as illegal ivory.

On June 3, the EU Commission has invited stakeholders from conservation and trade organisations to a meeting in Brussels in preparation of the EU position for the CITES Standing Committee meeting. On June 11, representatives from CITES authorities of EU Member States will meet to discuss "Intra-EU trade and re-exports of ivory" and the EU position on elephants at the annual meeting of the CITES Standing Committee, convened by the UN in Geneva from July 7-11.

Chad, an African elephant range state, has submitted proposals, supported by The Philippines, calling on CITES to address the conservation crisis for elephants by taking tough new measures to destroy all ivory stockpiles and close existing loopholes such as exemptions for trade in ivory traded as pre-Convention or "personal effects", which fuel trade and may allow poached ivory to be laundered with CITES certificates.