Over the past few years, it has been difficult to think of any soap-opera with the same drama and impact as the euro area debt crisis. Every time policymakers think that they’ve done enough, up pops another emergency to bite them in the posterior. Even though markets are calm at the moment, and the European Commission has relaxed countries’ deficit targets, you can bet that things will flare up again before too long.

At the same time, it’s important to note that the rest of the global economy is hardly in the finest fettle. While the US may have inadvertently been quite sensible in delaying austerity, the spending cuts that are due to hit this year will still weigh on growth – the main difference is that the economy looks more likely to have reached escape velocity already. But with private sector activity improving, half of the market is worrying about what happens when the US Federal Reserve starts to ease back on its asset purchases – at the same time as the other half of the market is already worried about the impact of its purchases so far. I for one would not blame Bernanke if he turned down another term at the Fed. Governor Kuroda at the Bank of Japan is having a better time of it with financial markets, but most economists still regard his aim of hitting 2% inflation within two years as pretty optimistic.

In emerging markets there are also real economic concerns. With advanced economies stumbling last year, Brazil and India saw weaker growth. That was supposed to represent a temporary ‘soft patch’ as these economies shifted away from being so dependent on exports, and relied more on domestic demand. It hasn’t turned out that way, with both countries still seeing relatively weak growth; and with inflation higher than policymakers would like, there is little scope for significant domestic stimulus. South Africa’s latest data confirmed that it, too, is having a tough time breaking out of the cycle of weakness.

Even in China, where policymakers were most successful in engineering a soft landing last year, there are renewed concerns that growth may have settled at a new, lower level rather more quickly than most people hoped. Over the longer term, China’s growth rate was always going to fall as the benefit of extra investment declined and the population aged. But it now looks like China will see a sub-8% growth rate this year and next. That is still strong by Western standards, but significantly lower than the more rapid pace of expansion seen in recent years. With the authorities keen to move to a more neutral policy setting – and possibly even tighten credit conditions, given concerns about house prices in the big cities – the world’s second largest economy has its own issues to deal with. 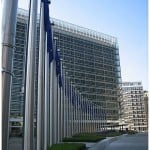 And then there’s us in the UK. Anyone who thinks that our issues are all down to the eurozone is simply living in cloud cuckoo land. Austerity hit growth hard at the start of this parliament, before the economy had reached escape velocity, and ironically while our exports to the EU were doing okay. Osborne is sharpening the axe again now. For all the glimmers of a slightly better outlook, it will still be at least two years before we get back to our average growth rate of 2.5% – and the lost ground over the past few years will leave lasting scars.

So yes, Europe is still the biggest risk out there. But it is not fair to lay the world’s problems solely at the feet of Mrs Merkel and Mr Draghi. The rest of us have our own troubles to sort out too.

By JLogan (Own work) [GFDL (http://www.gnu.org/copyleft/fdl.html) or CC-BY-3.0 (http://creativecommons.org/licenses/by/3.0)], via Wikimedia Commons