House price confidence peaks in Turkey, Luxembourg, the Netherlands and UK, but 25%  find it difficult to pay their rent or mortgage with Brits the most likely to rely on their home as a pension

Confidence in European house prices continues to rise, but higher costs are putting a strain on consumers with many struggling to pay the rent or mortgage each month.

The ING International Survey on Homes and Mortgages 2015, which surveyed 15,000 people about their attitudes on the housing market, reveals that overall people across Europe remain bullish on house prices. The majority of consumers (56%) believe that prices will rise over the next 12 months, with confidence up by three percentage points from last year.

More than ever, the majority believe that from a financial point of view it is better to own a property than rent (79%) – an increase of four percentage points on last year – and indication that consumers across Europe view property as an important asset.

This is especially the case in the UK where consumers are placing their faith in property for their retirement, with over a fifth (21%) viewing their home as part of their pension – significantly higher than the European average (15%).

However, 61 per cent of people across Europe feel that current house prices where they live are too expensive, with many unable to get a foot on the ladder.

It seems greater confidence is coupled with greater unaffordability, as one in four (25%) renters and homeowners admit to finding it increasingly difficult to pay their mortgage or rent each month.  The report found tenants renting in Italy and Spain and homeowners in Romania and Turkey are struggling the most with payments.

The Index found that over the last four years, when consumers have expected house prices to rise over the next 12 months, prices have then tended to increase.

"House prices are on the up in many European countries and consumers remain bullish that this will continue. As a result, we’re seeing more people viewing property as an important financial asset – including countries where renting is the norm – but there is also frustration with property being increasing unaffordable." 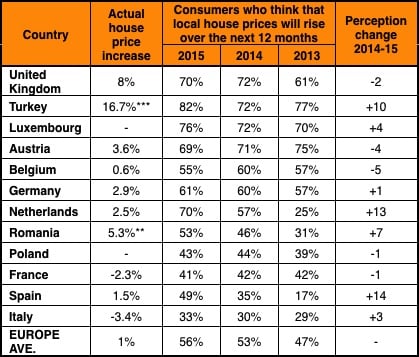