A last minute bail out of Cyprus prevented a default as upfront prices fluctuated 7pts towards the end of the quarter. However, default risks remain high at 70% over five years, according to the report.Â  Meanwhile in the UK, spreads widened to 55bps after the much anticipated credit rating downgrade, but finished the quarter strongly at 45bps, as a mix of austerity measures and bond purchasing continue.

Elsewhere, US CDS spreads remain unchanged on the quarter while the market continues to assess the impact of when the US ceases the $85bn monthly bond repurchase program. 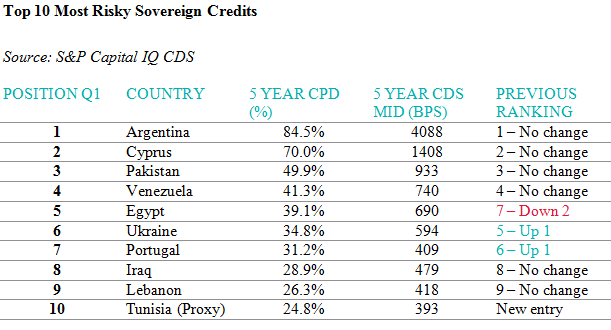 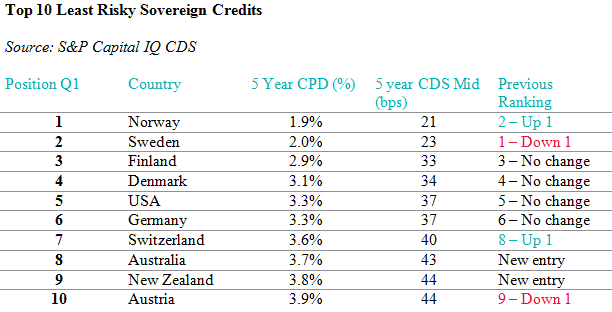 “Globally, focus in Q2 2013 will be on protection levels in Eastern European countries and the potential impact on the Eurozone, and Argentina where default probability surged this quarter”, says Jav Bose. “Venezuela is another country capturing the headlines, as its leadership under Chavez finally came to an end this quarter. However, the cost of protection still remains wide, closing the quarter at 740bps, 15% wider on the quarter.

“Perhaps a little surprisingly, Brazil also widens to 137bps, as it braces itself for both the World Cup and the Olympics in the next four years.”

The Global Sovereign Debt Credit Risk report focuses on changes in the risk profile of sovereign debt issuers, with the intention of identifying key trends and drivers of change. The report uses data from S&P Capital IQ CDS to determine Q1 2013 rankings and commentary for: