The European Investment Bank, Europe’s long-term lending institution, has agreed to provide a funding contribution of £175 million towards the completion of the motorway link between Glasgow and Edinburgh. The investment programme will include both completion of the M8 motorway between Scotland’s two largest cities and major improvements to the M73 and M74.

Drivers will benefit from reduced congestion as well as safer and quicker journeys as a result of the new M8 M73 M74 Motorway Improvements Project. The scheme will create hundreds of jobs during construction and, once complete, will significantly reduce congestion on one of Scotland’s busiest road networks. Long-term employment opportunities will also be created throughout the 30 year operation and maintenance of the new roads. Advanced works are currently underway and the road link will be designed, built, operated and maintained for 30 years following award of a concession agreement by the Scottish Government.

“The European Investment Bank is committed to supporting crucial investment in essential infrastructure across Europe and we recognise the importance of the M8 scheme to upgrade Scotland’s core motorway links. This project will not only provide economic benefits during construction, but will also improve safety and reduce costs for business in the years ahead through improved travel times. We are committed to providing significant long-term financial support for the scheme.” said Jonathan Taylor, European Investment Bank Vice-President responsible for the UK and Ireland.

Transport Minister, Keith Brown, said: “This marks a significant milestone in the timeline of what is a major transport infrastructure project for Scotland. Not only will these works vastly improve connectivity across Scotland’s Central Belt, the project will deliver far reaching benefits to the wider Scottish economy. 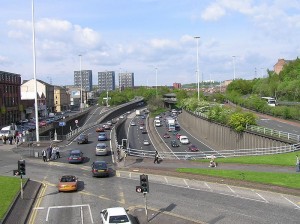 “We’ll see the creation of hundreds of new jobs which will leave a lasting legacy of a highly-skilled workforce, bolstering Scotland’s construction industry. In addition, the project will act as a catalyst to attract significant inward investment and stimulate continued growth of our business communities.”

Debt financing for the project is equally split between a direct loan from the European Investment Bank and a bond placement with international investors. The new Scottish scheme represents the first UK road project involving bond finance since the global financial crisis in 2008, and is the largest project to be financed through the Scottish Government’s Non-Profit Distributing model.

The European Investment Bank is committed to supporting crucial investment that stimulates economic growth and improves lives in Scotland. This has included recent support for investment such as the new City of Glasgow College and there is a strong pipeline of future projects currently under consideration by the EIB including new hospitals, transport infrastructure and other flagship investment across Scotland.

Over the last five years the European Investment Bank has provided more than GBP 4 billion for transport investment across the UK. Last year represented a record for overall EIB engagement in the UK, GBP 4.85 billion in 2013, up 59% from 2012.

The European Investment Bank (EIB) is the long-term lending institution of the European Union owned by its Member States. It makes long-term finance available for sound investment in order to contribute towards EU policy goals.

Iceland’s dilemma – to pay or not to pay, that is the question

UK Voters Are Not Informed Enough to Vote on EU Membership