•    One year to go until the e320 goes into commercial service

In the last two decades Eurostar has revolutionised cross-channel travel, providing a swift, seamless link between the UK and mainland Europe.  With passengers increasingly choosing high speed rail over plane for short haul travel and demand at an all-time high, the business is now set for further expansion of its services into Europe.

On the eve of its 20th anniversary Eurostar unveiled in public for the first time its new state-of-the-art e320 train scheduled to enter commercial service at the end of 2015.  At the same time the company announced its decision to augment its fleet with a further 7 new e320 trains.  With the original order of 10 e320s now in the final stage of completion, this increases the number of new trains to 17 in total.

Beyond its core routes of Paris, Brussels and Lille, Eurostar serves a range of destinations including the French Alps, Swiss Alps and Geneva.  May 2015 will see the start of a new year-round direct service to Provence, stopping at Lyon, Avignon and Marseille, followed at the end of 2016 by the launch of a direct route to Amsterdam with stops in Antwerp, Rotterdam and Schiphol along the way. 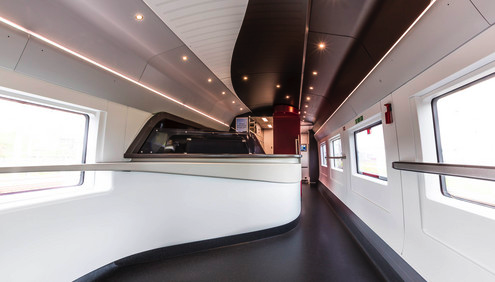 “Having had ten consecutive years of growth, we are seeing record demand for our services and the addition of new trains to our fleet will be key to achieving our growth ambitions.  With just one year to go until our new e320 train comes into service, passengers will see a complete transformation of our service.  The combination of bold design, chic interiors and wifi connectivity will raise the bar, providing an unprecedented level of style and comfort for our customers.”

Arrival of the e320 heralds the next generation of Eurostar  services

The introduction of the e320 represents a major advance for international high speed rail.  Built to a bespoke specification these trains are ‘inter-operable’ with the ability to operate across diverse  European signalling systems, opening up the potential for a whole range of new direct services between the UK and European city centre destinations.

Carrying 900 passengers, the e320 boosts capacity per train by 20% and is capable of reaching a speed of 320 kph (200 mph).  With the external livery and interiors designed by Pininfarina, the legendary Italian design house, world-renowned for its iconic car designs, the new Eurostar train boasts many innovative features aimed at maximising energy efficiency and delivering an enhanced experience for travellers.

Recognising the importance of connectivity for passengers, going forward, the Eurostar fleet will be equipped with free wifi throughout the train, allowing customers to email, chat and tweet during their journey.  The new wifi portal will provide a range of information and entertainment including live news feeds and weather reports as well as a collection of destination guides.

With the introduction of the e320, customers will enjoy more space per seat with each seat equipped with power points and a USB socket.  Business passengers will experience the ultimate in on-board comfort with a carefully designed environment aimed at maximising productivity whilst offering a relaxing space.  For leisure customers the e320 will represent a considerable upgrade with a newly designed bar buffet, ergonomically designed reclining seats and increased luggage areas.

“Over the last twenty years, we have led the way in cross-Channel high speed rail travel, cementing the link between the UK and mainland Europe.  Our 20th birthday represents a key milestone for our business and marks the start of the next phase of growth and expansion.  With this substantial investment in our fleet, our stations and the on-board experience, passengers can look forward to  an exciting future.”

To mark its two decades of service, over the next two weeks, Eurostar will be staging a programme of celebratory activities on-board its trains and in its stations.  This includes surprise golden tickets, giveaways and special events for customers as well as a dedicated birthday promotion running between 13 and 24 November  offering returns in Standard for £59/€69 and in Standard Premier for £149/€179 – for travel between 5 January and 12 February next year.

Nicolas Petrovic, Chief Executive of Eurostar, made a presentation to the media, followed by the unveiling of the new train and an on-board tour.

Speed limit on motorways to be increased to 80 mph