As it stands, the retail sector is showing weakness and providing troubling news on consumer spending. According to Thomson Reuters, sales at retail stores open for at least a year increased a dismal 3.9% in July, below the analyst expectation of a rise of 4.4%. (Source: Reuters, August 8, 2013.)

A well-known name in the retail sector, Gap Inc. (NYSE/GAP), registered an increase of one percent in July same-store sales from July 2012. Analysts were expecting an increase of 1.7%.

Costco Wholesale Corp. (NASDAQ/COST) said its July same-store sales increased four percent from July 2012; analysts were expecting a rise of 5.1%. The company also stated that consumers are shying away from buying big-ticket items such as electronics.

What’s even more troubling…to get those sales in July going, the retail sector had to offer deep discounts to customers.

July usually kicks of the back- to-school shopping season and gives us an idea of how consumer spending going into the fall season looks. After the holiday shopping season, the back-to-school season is the second busiest for the retail sector.

My question; how long can the optimism in retail stocks last while demand in the retail sector from consumers is falling? Sooner rather than later, the irrationality between the prices of retail stocks and what their growth prospects are will meet an unpleasant reality.

Through its quantitative easing program, the Federal Reserve has created about $3.0 trillion in new money out of thin air. This was all in the name of getting consumer confidence in the U.S. economy going again. 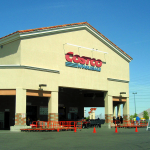 Did this actually occur?

As it stands right now, consumer confidence in the U.S. economy is bleak and quantitative easing is failing on this front. Quantitative easing, as far as I’m concerned, has helped all those connected to Wall Street, has created another stock market bubble, and hasn’t helped the average American.

We can see from the “Japanese Example” that quantitative easing doesn’t increase consumer confidence. If it did, then we would see its effect on the Japanese economy, as the central bank there has been printing money for some time now.

Just like the Japanese economy, quantitative easing here has caused the stock market to rally.

Now, once quantitative easing ends, if it ever does, it can be damaging to both the bond market and the stock market. I remain firm on that belief and recent mixed messages from the Federal Reserve have only cemented my conviction. Whenever we heard members of the Federal Reserve talking about the Fed tapering off quantitative easing, the stock market declined and bond yields soared.

If the money printing ever does end, it won’t be pretty for the markets.

Mandy writes to the PM

As the UK economy slows, is it time to fall in love with the FTSE 100 again?