As my regular readers know, over the past couple of months, I’ve repeatedly raised my concerns that the stock market is increasingly becoming out of touch with the underlying reality of our economy. Now, the latest batch of reports from companies is showing just how inflated the stock market really is.

Now that we’re coming into the holiday season, I believe this year is going to be one of the worst for the retail sector in generating any corporate earnings at all.

It really boils down to two things: the consumer and the companies within the retail sector.

The average American, as we all know, is still getting the same wages, getting hit with a higher payroll tax this year, and is still uncertain about their future due to high unemployment levels.

Considering the situation of the average American, companies within the retail sector are literally doing everything possible to convince consumers to spend in order to increase revenues and, hopefully, generate some corporate earnings.

Target Corporation (NYSE/TGT) just recently reported its third-quarter results, with corporate earnings falling 46% year-over-year. While part of the decrease was due to a disappointing launch in Canada, much of the decline in corporate earnings was due to consumers’ unwillingness to spend. (Source: “Target Reports Third Quarter 2013 Earnings,” Target Corporation, November 21, 2013.)

You don’t have to believe me when I say that the average American does not have excess cash on hand. In the financial release, the chairman, president and CEO of Target, Gregg Steinhafel, stated that its U.S. division is “…an environment where consumer spending remains constrained.” (Source: Ibid.) 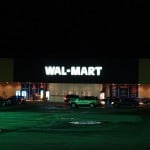 This is only the beginning for the retail sector.

As the holiday season approaches, companies are becoming even more aggressive with respect to offering deals to chase the very same consumers, which will ultimately just hurt corporate earnings.

Wal-Mart Stores, Inc. (NYSE/WMT) is advertising $98.00 32-inch flatscreen TVs for the Thanksgiving holiday. In addition, the company, along with many other stores in the retail sector, is offering price-matching guarantees. This is going to erode corporate earnings across the retail sector.

Best Buy Co., Inc. (NYSE/BBY) just warned that there would be a significant amount of holiday pressure on profit margins due to heavy competition. 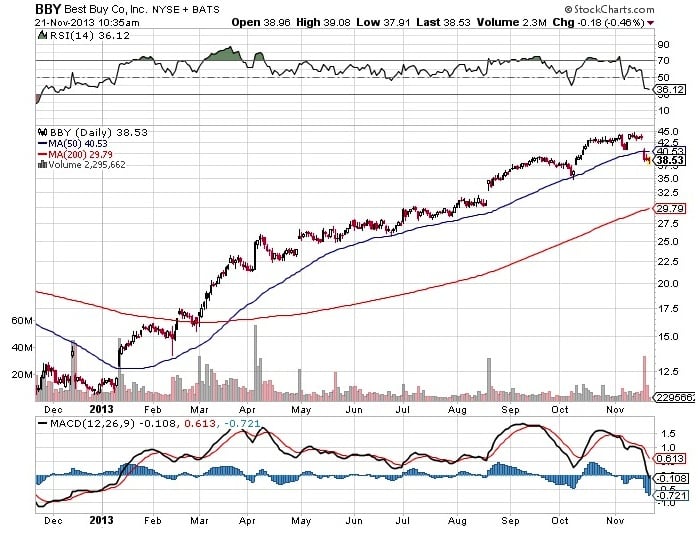 Looking at the above chart, one would think that the retail sector is healthy and corporate earnings are accelerating—nothing could be further from the truth. We are now entering what will be, in my opinion, the most difficult holiday season in years.

With consumers strapped for cash, all of these companies in the retail sector will be chasing the same dollars through essentially one method: price competition.

To get people in the door, it seems the only effective method is by discounting prices to a ridiculously low level. As a consumer, I think this is great. As a potential investor, I would stay far away from the retail sector, as corporate earnings will be severely impacted from the competition.

Are there any positives? I would look to companies that cater to the wealthy, as they’ve made a lot of money in the market. With their target consumers worrying less about cash, these stocks don’t have to chase the same dollars. With price competition being less fierce, these stocks’ corporate earnings are likely to remain unaffected by the holiday season.

One company that has benefited is Sotheby’s (NYSE/BID). With record after record being broken in the high-end art retail market, Sotheby’s is the best way to gain exposure to the extremely wealthy. Plus, with the company’s expansion plans of adding more clients from China, I think the next few years will see substantial growth in both revenues and earnings for Sotheby’s.

This article Even with Discounts Flooding Retail Sector, These Stocks Prospering by Sasha Cekerevac, BA was originally published at Investment Contrarians

Income funds proving popular in the run up to ISA deadline