Despite seemingly being every party’s favourite political football, the great and the good of UK independent healthcare were in attendance last night as sector experts Laing & Buisson hosted its eighth Independent Healthcare Awards.

In his opening speech, CEO of Laing & Buisson William Laing said that while the event would recognize 17 ‘winners’, the volume of remarkable healthcare projects being carried out with independent sector involvement was such that outside of these names there is an ever growing list of success stories which the country should be very proud of.

He added that in a tumultuous year there are lessons to be learned from the recent Competition Commission research into the private healthcare market, and great strength to be taken from the report’s acknowledgement that ‘independent sector providers now [play] a significant role in virtually every aspect of health and social care’.

Established in 2006, the Independent Healthcare Awards programme continues to highlight the massive range of achievements within the sector and to pay tribute to those individuals and teams which have demonstrated outstanding excellence over time.

This year’s board of judges included Director of Operations at the Royal College of Nursing, Janet Davies; Director of NHS Partners Network David Worsket; Director of NHS Provider Transition at the Department of Health, Bob Ricketts and Chief Executive of the Private Healthcare Information Network Matt James.

At the 2013 Awards, comedienne Sue Perkins entertained guests and while overseeing the presentation of 17 awards in categories ranging from Medical Practice to Healthcare Outcomes to Entrepreneurial Achievement. See the end of this article for a full breakdown.

Highlights of the evening included a silent auction on behalf of leading children’s medical research charity Sparks which funds research into a wide range of medical condition affecting babies, children and mothers-to-be. 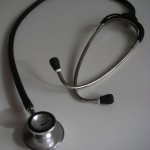 The event also including the naming of the top three places in the 2013 Laing’s Healthcare 20 – a list set up three years ago to throw a spotlight on the work of the most interesting and exciting companies presently working in UK healthcare. Waling away with first place was the polymath of health and social care, Care UK. In second place was well-respected mental health services provider St Andrews while third place was taken by the country’s largest elderly care provider Four Seasons Health Care. Voted for from a list of 45 names, the full 2013 Laing’s Healthcare 20 will be published shortly.

Closing the evening Mr Laing said: ‘I have been proud to watch this event evolve from its inception in 2006, to this, a vital and vibrant fixture in the healthcare calendar – and it with much anticipation that I look forward to the year ahead.’ 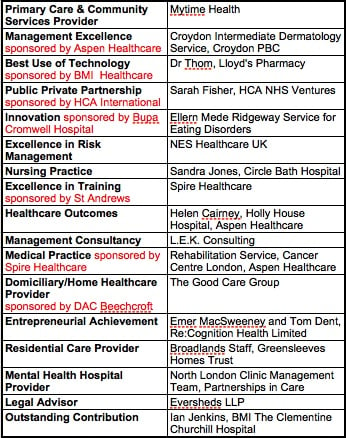