Today the Export-Import Bank of the United States (Ex-Im Bank) announced it has topped $1 billion in support of American-made business-aircraft and helicopter financings since the beginning of FY 2012.

In a deal that drove recent business-aircraft and helicopter financings over the $1 billion mark and supported approximately 2,100 American jobs, the Bank’s board approved a guarantee of a $300 million loan extended by Apple Bank for Savings to Minsheng Financial Leasing Company Ltd. of Tianjin, China, last December to finance the purchase of eight aircraft manufactured by Gulfstream Aerospace Corporation of Savannah, Ga.

“Business aircraft is a great example of a homegrown American industry that is creating jobs in communities across the country, thanks to support from the Export-Import Bank,” said Ex-Im Bank Chairman and President Fred P. Hochberg. “Despite an increase in the number of foreign competitors, America’s business-jet manufacturers continue to demonstrate the advantages of manufacturing high-technology, high-quality products in the USA. Our loan guarantee, which pushes us over the $1 billion threshold for business-aircraft and helicopter financings months before our in-house deadline, will boost the export of eight of these state-of-the-art, American-made business jets to China and bolster U.S. jobs in Georgia. It is great to see that even in this competitive global marketplace, the Chinese continue to buy American.” 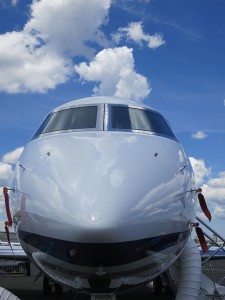 At the European Business Convention and Exhibition in May 2012, Chairman Hochberg announced that Ex-Im Bank would provide support for at least $1 billion in business-aircraft and helicopter financings by the end of 2014. Ex-Im Bank met the goal well in advance.

Founded in 2008, Minsheng currently ranks as Asia’s largest business-jet leasing firm. The company was advised by Airfinance Leasing LLC, an Ex-Im Bank Qualified Advisor, and plans to lease the Gulfstream aircraft to various end users. The purchase of the four G450s and four G550s occurred in early 2013.

Gulfstream Aerospace Corporation, a wholly owned subsidiary of General Dynamics, designs, develops, manufactures, markets, services and supports the world’s most technologically advanced business-jet aircraft. Gulfstream has produced more than 2,200 aircraft for customers around the world since 1958.

“Gulfstream’s presence around the world has dramatically increased over the past 10 years,” said Larry Flynn, President of Gulfstream Aerospace. “In 2008, we had 10 Gulfstream aircraft based in China. Today, this number has grown to more than 80 aircraft. The support that Gulfstream receives from Ex-Im Bank allows us to be more competitive around the world and has enabled us to grow the number of employees in the U.S.”

Ex-Im Bank is an independent federal agency that creates and maintains U.S. jobs by filling gaps in private export financing at no cost to American taxpayers. The Bank provides a variety of financing mechanisms, including working-capital guarantees, export-credit insurance and financing to help foreign buyers purchase U.S. goods and services. In the past fiscal year alone, Ex-Im Bank earned for U.S. taxpayers more than $1 billion above the cost of operations.

In FY 2013, Ex-Im Bank approved more than $27 billion in total authorizations to support an estimated $37.4 billion in U.S. export sales and approximately 205,000 American jobs in communities across the country. For the year, the Bank approved a record 3,413 transactions– or 89 percent–for small-businesses. Small business exporters can learn about how Ex-Im Bank products can help them increase foreign sales at http://go.usa.gov/ZVTd. For other information about Ex-Im, visit www.exim.gov.

Unemployment Falls, Self-Employment Rises: What Does it Really Mean?