A recent study indicates that the average retirement income expected for those retiring in 2012 will be 16% lower than in 2008.

Even over the last year the average expected retirement income has fallen by 6.2% from Â£16,600.

A double-whammy when you consider that inflation has been relatively high for the past few years, especially for pensioners say some.

The study by the Prudential was conducted between the 2nd and 12th of December 2011 and involved 9,614 UK workers aged over 45 with 1,003 of them intending to retire this year.

About 20% of those retiring this year, the ‘Class of 2012’, expect their retirement income to be less than Â£10,000 per annum and, of the Class of 2012, only 37% of them think they have enough saved for a comfortable retirement.

Prudential’s retirement income expert, Vince Smith-Hughes, said “The current economic climate has created the perfect storm for people in the run up to retirement. The impact of the credit crunch, banking crisis, recession, and concerns over the Eurozone, has been reflected in the fact that expected retirement income levels have hit a five-year-low.” 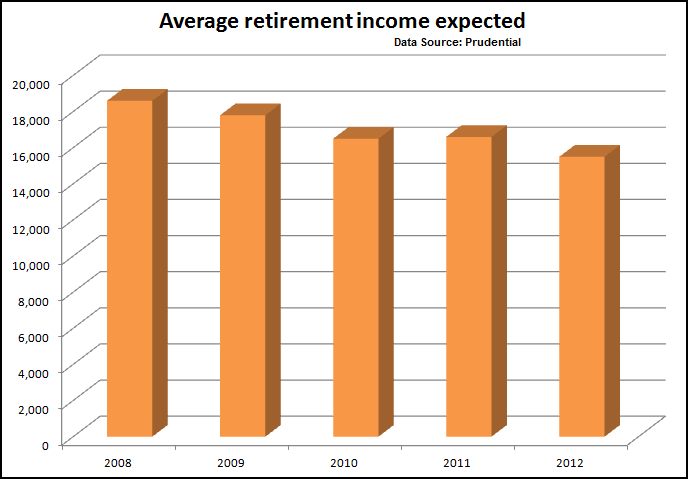 Men are however it seems more optimistic about their prospects in retirement with 45% of them saying they would have enough to live comfortably compared to only 31% of women. But 18% of the Class of 2012 admitted to having no real idea of what their retirement income would actually look like.

There is a perception that people need less to live on when they retire, but with no job to occupy them there is actually more time to fill, which may mean higher expenditure on such things as hobbies as well as health as one gets older.

“It is concerning that expected retirement incomes are going down, while pensioner expenditure is going up.” Added Vince Smith-Hughes “However, there are some practical steps that workers and imminent retirees can take to ensure a more comfortable retirement. For those who are still working, it has never been a more important time to save into a pension. The longer that savings are invested in a retirement pot, the greater the opportunity they will have to grow. However, even those due to retire this year could make their retirement funds generate better incomes. Consulting a professional financial adviser can help savers to make more informed pension saving and retirement income decisions.”