Yesterday’s poor manufacturing and trade data were another sign that the much-heralded rebalancing of the UK economy is failing to materialise. After years of debt-fuelled consumption and growth, we are frequently told, what is now needed is to shift to a more export-driven economy, with investment also spurring activity. Subscribers to this rhetoric fret that, although the UK’s economy gloom may be lifting, consumption still seems to be doing the heavy lifting.

But is this rhetoric justified? There is sometimes a tendency that if something is repeated often enough it can become an accepted truth, even if the facts don’t stack up – the claims that labour market regulations make employment too costly are a case in point here, as I have discussed previously. So what are the facts on rebalancing?

The Office for National Statistics currently publishes quarterly GDP data back to 1955. Back then, there were few concerns about debt-fuelled growth, largely because many people simply didn’t have access to the same types of credit we have today – mainstream mortgage products, let alone the eye-shrivellingly expensive Wonga, simply weren’t available. So how different are things at the start of 2013, compared with 1955?

It turns out that private consumption accounted for 67% of GDP in 1955 – almost exactly in line with the first quarter of this year. There is little sign of household spending being over-extended. And that is not just because household saving has risen since the recession hit – in the five years prior to the 2008 recession, consumption averaged 64% of GDP. The simple fact is that consumption never over-accounted for growth in the way that some politicians and commentators claim.

In no small part, this is because they simply don’t understand the economics. The sharp rise in household debt seen during the 2000s was primarily driven by mortgages, which in turn reflected house prices. Although on average these fell by around 10% to 15% during the recession, they never really crashed, and are now rising again. And the money households borrowed to buy a house had only a marginal impact on consumption – so the debt did not fuel GDP growth, it just fuelled larger household balance sheets overall. Certainly, that left consumers exposed when unemployment rose and house prices fell – but they have weathered the storm reasonably well. There is little need to rebalance consumption.

What about trade? In 1955, the trade deficit was about 1.5% of GDP – again, almost bang in line with where we were at the start of this year. The UK has never really run a persistent positive trade balance – even the early-1980s improvement reflected the deep recession and was ultimately temporary. Expecting to suddenly transform into a Germanic model of export-driven growth, solely on the basis of rhetoric rather than any meaningful policy measures, is simply stupid.

What about government spending? Here there are some grounds for concern – in 1955, government consumption accounted for a little under 18% of GDP, compared with 22% now. That does partly reflect the growth of the public sector in the mid-2000s – between 1997 and 2002, the average was still 18%, but it subsequently rose. But the higher current share also reflects the fact we are currently still running a sizeable deficit, and the economy is still weak. Based on normal cyclical patterns, we would expect government spending to be above average as a share of the economy. And by the time the deficit is finally closed, this will probably not be out of whack. 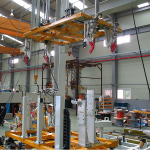 Investment is by far the most worrying, and where there is a genuine need for leadership from our politicians. In 1955, investment accounted for over 17% of GDP. In the latest data, it had fallen to under 14%. Investment is critical – it is ultimately what drives genuine improvements in living standards – and thus far the government has done nothing to arrest the decline. In fact, a large part of the fall reflects the scrapping of vast swathes of public investment. To be sure, private sector spending is also weak – which is ultimately a sign that businesses do not have much confidence in the UK’s long-term economic prospects. Getting the deficit under control is not enough – sometimes, pump-priming genuinely is required.

These data should act as a call to arms for the Coalition. There is little need to discourage consumer spending, or worry unduly about the size of government – the adjustments that are required there are well underway, to the extent that they are needed. Similarly, hoping for a trade surplus will achieve little. But if the government is really serious about rebalancing, it needs to do something about investment, and quickly. Are the Coalition partners up to the challenge?

Image By Mixabest (Own work) [CC-BY-SA-3.0 (http://creativecommons.org/licenses/by-sa/3.0)], via Wikimedia Commons

Time to jump off the property ladder