PwC’s Golden Age Index is a weighted average of indicators – including employment, earnings and training – that reflect the labour market impact of workers aged over 55. The UK has remained middling in the rankings since 2003, falling by one place from 18th in 2014 from 19th in 2015. 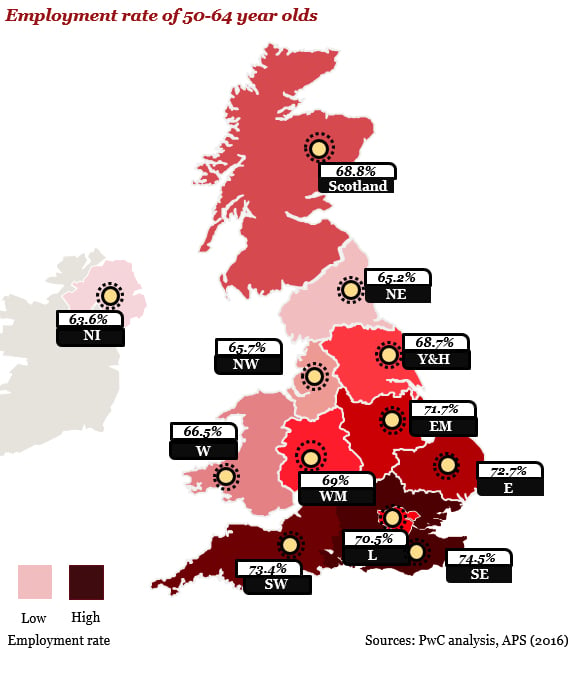 “While the UK’s absolute performance on our Golden Age Index has improved over time, it’s still scoring below the OECD average. As the number of people over 55 continues to grow steadily and life expectancy increases, the UK needs to make it as easy as possible for people to continue working for longer if they wish to do so. This would boost both GDP and tax revenues, so helping to pay for the increased health, social care and pension costs of an ageing population.

Across the UK older female workers have a lower employment rate than their male counterparts at 64.9% for 50-64 year olds compared to 75.4% for males. The gender pay gap also increases with age, from an average of £28 per week for 22-29 year olds to £153 for 50-59 year olds. PwC analysis suggests the labour market experience of older women is often characterised by lower pay, more part-time work and higher barriers to entry than males, driven by work-life patterns and occupational segregation.

PwC has found a higher educational background is also associated with working later into old age. More qualified older workers may be better able to adapt to technological changes, while the industries in which more qualified workers are employed could be better suited to working in later life.

“Reforming pension systems and providing financial incentives to encourage later retirement will be key to governments increasing the number of older workers. Measures to combat age discrimination and support lifetime learning in the face of rapid digital and technological progress are also required. The call by the government’s business champion for older workers, Andy Briggs, for employers to increase the number of older people in the UK workforce by one million over the next five years is a step in the right direction, but more needs to be done.”

Iceland remains number one in PwC’s Golden Age Index, a position it has held since 2003. Nordic neighbours Sweden and Norway also continue to do well with places in the top 10. Turkey maintains its position at the bottom of the index, having fallen 12 places since 2003.

Across the OECD as a whole, PwC estimates the potential long-term GDP gain from raising employment rates for the over 55s to match Swedish levels could be around $2 trillion. Potential gains could rise as high as 16% of GDP for Greece and 13% for Belgium. For the US, they could be around 3% of GDP, or around 2% of GDP for Japan.

“For employers, flexible working and partial retirement options can pay dividends, as can redesign of the workplace to meet the needs of older workers. Flexible working policies can incentivise women to remain in work longer, so having the right policies in place will increase the employment rate of those over 55 and may help to reduce the gender pay gap which is shown to increase with age.

“The life experience of older workers and the skills they have acquired throughout their career make them hugely valuable to the modern workforce. To build on this leading employers will offer older workers opportunities for development, including reverse mentoring schemes on digital skills and apprenticeships.”